The Story of Jenna and Bisquick

This year, senior veterinary student Jenna Rooks used her shelter medicine training to make a life-saving difference for a lucky dog at a municipal shelter in Florida. Jenna working to socialize Bisquick during the shelter visit

In most animal shelters, veterinarians are called on to manage the physical health of shelter pets. But at Maddie’s® Shelter Medicine Program, veterinary training also includes behavioral health for shelter pets. Students learn how to evaluate and enhance physical and behavioral health programs in shelters, all under the supervision of MSMP faculty Dr. Julie Levy, Dr. Brenda Griffin, and Dr. Cynda Crawford. It was during this training that Jenna Rooks first encountered an extremely fearful dog who was considered “unadoptable.” Jenna describes her initial impressions:

“He had characteristics of a bait dog — scars all over his body, both puncture marks and scratches, at different stages of healing. Some were fairly fresh and still had scabs on them. Also, he was terrified of any other dogs. Even when I had him walking outside with me we couldn’t walk past the play pen if other dogs were in there playing. He would freeze and lay flat on the ground again.

…he was completely shut down. He hadn’t eaten since he arrived and wouldn’t move at all. He just laid flat on his kuranda bed and to clean his cage he would have to be picked up…

“His issues were very severe. He had only been in the shelter for I think five days or so, but he was completely shut down. He hadn’t eaten since he arrived and wouldn’t move at all. He just laid flat on his kuranda bed and to clean his cage he would have to be picked up to move him. He would also immediately tense when anyone would approach or touch him.”

Bisquick gets an intervention

Jenna began to affectionately refer to the little brown dog as “Bisquick” because of his pancake-like reaction to people and animals. Dogs like Bisquick are typically considered not adoptable and put on the euthanasia list. At the very least, Bisquick’s behavior put him at high risk for a long stay with further deterioration of his behavioral and health issues. Jenna and the team of students and faculty began to assemble a plan to intervene on behalf of Bisquick. Below is Jenna’s play-by-play review of their work with Bisquick:

“Our first step to try to help Bisquick was to get him out of the kennels. The first day, we decided to let him stay outside in the play area. He remained flat on the ground the entire time. He would completely ignore any other dogs or humans that tried to approach him. I sat with him, talking to him softly and stroking his head. After two days, he at least had his head off the ground and was looking around outside. He still wouldn’t get up, but he was more comfortable with me. I was able to get him to eat for the first time in a week. We started him on trazadone, a drug used for anxiety issues in dogs, especially in shelter situations.”

“The rest of the week was mostly spent building up his trust. Another Shelter Medicine student started working with him as well so that he would become comfortable with more people than just me. We had him out with us when we made treat buckets and other enrichment items for all the other dogs in the shelter. By the end of the week, he seemed okay with most women, but he would flatten immediately if a man walked near him or if he heard a man’s voice. I started encouraging him to walk a few steps using cheese to entice him. By the end of the week he was walking okay on leash.”

“At the end of our stay at the shelter, I prepared a plan for the shelter staff to continue Bisquick’s rehabilitation program, including staying in a quiet room rather than the noisy kennel, daily walks outside, “quiet time” in an office with staff, treat-stuffed Kongs, and the anti-anxiety drug.”

How did Jenna know how to handle such a difficult case? The MSMP shelter medicine courses and field trips provided the training and hands-on practice that prepared Jenna for the Bisquick challenge. Jenna explains:

“I think a lot of it was also going slow with him, not pushing him too much too fast, and restoring his trust in humans.   Being patient and gentle with these terrified dogs is so important but the shelter staff is overwhelmed with taking care of all the animals and don’t have extra time to focus on the special needs animals.” 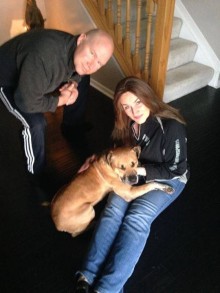 Bisquick relaxing with his new family

Not long after the Maddie’s Shelter Medicine team’s visit to the shelter, a volunteer arranged an out-of-state adoption for Bisquick. He went to a couple in Franklin, Ohio. The story of Bisquick and Dr. Rooks is just one example of shelter veterinarians and veterinary students working to advance the care of homeless animals in shelters. Together, veterinarians and shelters can reach our life-saving goals, including the saving of “unadoptable” pets like Bisquick.

Dr. Jenna Rooks earned her DVM degree and Maddie’s® Professional Certificate in Shelter Medicine in May 2014.