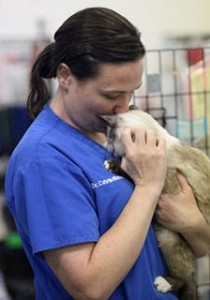 Veterinarians and animal shelter workers have something in common: increased risk of the condition known as compassion fatigue. And if you’re a shelter veterinarian, you may just get a double dose of its burden of emotional numbness, strained interpersonal relationships, anxiety, sleep disorders, and health problems.

“As a profession, veterinarians have a higher risk for stress and suicide than other medical professionals,” said Dr. Julie Levy of the Maddie’s® Shelter Medicine Program at the University of Florida. “Techniques for self-care aren’t currently included in the veterinary curriculum, so veterinarians often struggle to cope with the needs of sick pets, being a witness to cruelty, and doing their jobs, while frequently neglecting the need to create a healthy work-life balance.”

For Dr. Sheilah Ann Robertson, a veterinarian boarded in both animal welfare and anesthesiology currently teaching at Michigan State University, the specters of stress and suicide were starting to hit close to home.

“I was personally feeling overwhelmed by responsibilities and began to wonder if I was burned out or exhausted,” she said. “I didn’t know much about the term compassion fatigue and how it might relate to me, but I was very much affected by the suicide of a veterinarian friend, and also the death of Dr. Sophia Yin.”

Dr. Yin was a veterinarian and animal behaviorist renowned for developing handling and restraining strategies designed to reduce fear and stress in animals. Her suicide in 2014 haunts many veterinarians, particularly those who work with and in shelters. In the Online Maddie’s® Shelter Medicine Program, students struggled to make sense of it, and director of distance learning Dr. Terry Spencer realized they were themselves demonstrating signs of compassion fatigue.

“During the course, there are assignments where we talk about controversies in shelter medicine, as well as the difficult decisions and assessments we have to make every day,” she said. “It was clear that many of our enrolled students were struggling with heavy issues in their practice. They have to triage animals, assess their pain, find the resources to help them, or realize they can’t.”

The problem was compounded because many of the veterinarians in the course felt they had little or no influence with management, no way to make things better for the animals, and no control over shelter policies, including those relating to euthanasia.

“We saw that our students and our colleagues were suffering, so we had to do something about it,” Spencer said. “We started including discussion of compassion fatigue, what it is, what to do about it, in a couple of places in our courses.”

Before her death, Dr. Yin had given them permission to use some of her training materials in the courses. News of her suicide broke in the middle of a behavior course taught by an instructor who knew her. The ensuing grief and shock were a powerful message about the stakes of the problem.

“We realized we didn’t know enough to really help,” Spencer said. “We were bringing students to the brink, getting them to realize they suffered from compassion fatigue, but didn’t have anything to offer them to help.”

She went on the hunt for someone who could help fill this gap for her students. Two former residents in the shelter medicine program had met certified compassion fatigue educator Jessica Dolce at a sheltering conference, and highly recommended her.

“We’re not the only profession that gets compassion fatigue,” Spencer said, “but I’d had no idea there were certified educators in the field. And here was Jessica, who was applying her knowledge specifically to the animal caring professions, and doing it online.” The program launched its “Compassion Fatigue Strategies” course in the summer of 2015, with Dolce at the helm.

Dolce’s connection with both compassion fatigue and the animal professions was a personal one. “My whole career has been working with animals in different capacities,” she said. “I’ve been both a staff member and volunteer for shelters and animal welfare organizations. And I had my own pretty profound experience of compassion fatigue at a time when I didn’t know what it was.”

Five years after Dolce stopped working at the shelter, she started doing research into what exactly had gone wrong during her time in animal welfare. “I basically stumbled into compassion fatigue,” she said. She became a certified compassion fatigue educator, and dedicated her work to helping people in the animal welfare and veterinary fields.

“Everyone who works with animals feels this, even if they’re coming from different fields,” she said. “The needs are great, the resources small. How do we let ourselves feel we’re enough? Because if we don’t let go to a certain extent, we’ll eventually not be able to keep doing the work at all.”

That was exactly what almost happened to Dr. Lawrence Garcia of the Broward County Animal Care and Adoption Division, who was ready to get out of the shelter field when he enrolled in the new online course.

“I was totally in the gutter when I started the class,” he said bluntly. “By nature of being a veterinarian, we’re in tune to take everyone’s pain. I’m upset when what I do doesn’t work, and it can wear on you. It’s so easy in this field to take on the sadness.”

Dr. Robertson agreed. “I was so relieved to find out that I was not alone in feeling overwhelmed and exhausted,” she said. “It was very helpful to learn that compassion fatigue is what the instructor called ‘a predictable, normal consequence of working in a helping field.’”

Robertson and Garcia weren’t the only ones who felt that way. “We had more than 60 students enroll,” Spencer said. “Not all of them completed the course, but the ones who did said it was a life-altering experience, and report they’re incorporating the strategies Jessica taught in their practices now.” 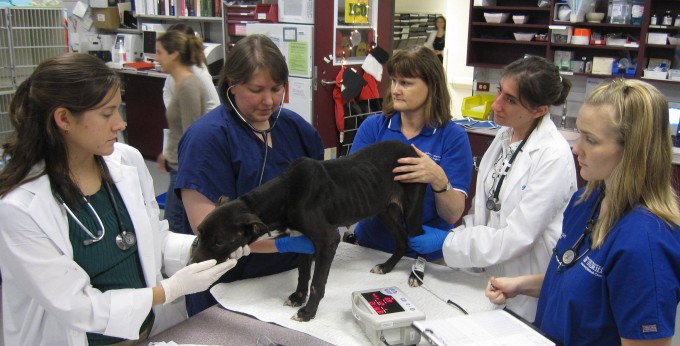 Dolce didn’t just teach her students what compassion fatigue is and how to recognize it; she gave them tools to prevent it.

“I know how overwhelmed everyone is, and how small the steps need to be in order for everyone to succeed,” she said. “We have to keep breaking things down smaller and smaller so we’re not overwhelming ourselves. For example, given how incredibly busy everyone is, the idea of suggesting they do ten minutes of meditation is laughable, but suggesting they do it for one minute is possible.”

Dolce says people struggling with these experiences need to have the space to talk about them. “They need to have someone like me say, ‘If you need to cry, go to the bathroom and cry. Or meditate. Not only is it okay, but it’s smart, and you’re a superstar if you can do that.’ When students come back to class and report they took a break to listen to a few songs on the radio in their car at lunch, we applaud them for doing that. We need the validation that it’s okay to do these things.”

The strategies and perspective shared in the course were particularly helpful to Dr. Robertson. “It was hard to finally accept I have been ignoring myself for too long,” she said. “This class helped me understand that it is not a sign of failure or weakness to stop, say no, and care for yourself, to realize that just stopping and taking a deep breath can help.”

For Dr. Garcia, learning a new way to change habits long-term was revolutionary. “Take exercise as an example,” he said. “So many times you start out gung ho with some new activity or resolution, and then the next thing you know, you’re not going. But what if instead of starting out gung ho, for a week you drive past the gym so it’s part of your routine. Then when that’s a habit, you park in the lot for a week, and then that’s a habit. Then you go inside, not to work out, but even just to use the bathroom. And now that’s a habit. And the next thing you know, you’ve created the habit of going to the gym. It’s become commonplace, a part of your normal routine.”

That was the approach Garcia adopted for some of the changes Dolce suggested, like taking three deep breaths when you’re feeling overwhelmed. “Now, when if I feel stress, regardless of the cause, I take three deep breaths,” Garcia said. “You can do it anywhere. You always know you can give yourself that peace.”

Robertson also learned to create “work-home” transitional rituals. “I now try to do something to separate work and home, even if it is just making sure I don’t go home in my scrubs,” she said.

For some students, a few minutes with pen and paper made all the difference. “The ‘Jot on This’ idea was very helpful,” Robertson said. “Just spending 5 minutes writing about a problem or an issue.” She also takes the time to write down three things to be grateful for every night before she goes to bed.

“The mantra I learnt on the course that has stuck with me is: ‘You can’t stop the waves but you can learn to surf,’” she said. “I love that!”

Dolce said she learned as much as she taught in the course. “I totaled it up, and there was something like 500 years of experience in that class,” she said. “People who work with animals remain my heroes. I’m inspired by the knowledge and caring they demonstrate. All we need is a place to have these discussions. The wisdom is there!” 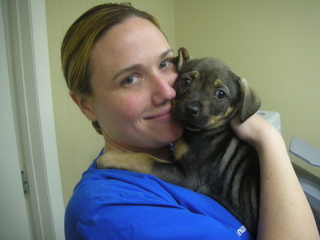 For Dolce and Spencer, online was the obvious place for those discussions to take place. “We wanted to bring this resource to people who are out there doing that work,” Dolce said. “To learn about compassion fatigue, they would have to go to a conference, or maybe an organization would bring someone into the workplace for one day.” Online courses can be fit into a working veterinarian or shelter staffer’s schedule.

Convenience and access aren’t the only values of the online approach. “What has become clear over the last couple of years of running the program is that online students disclose more than they will in a face to face class or at a conference,” said Spencer.

Dolce agreed. “Some are skeptical about online classes, but there’s a real gift in being able to type out your stories instead of having to say them out loud,” she said. “People share some really heartbreaking personal stories of their doubts and fears and the pain that they’re going through. And in every online class, there are people who are very quiet and never type a word, but at the end they say how helpful it was to see themselves reflected in what others said.”

The course will be back in the spring, with enrollment open to 100 students. “If we can help save someone’s life, as at least one student told me, then I’m willing to keep doing this,” Spencer said.

“When we’re stressed, fatigued, lacking empathy, and burned out, it compromises our ability to do good work,” Dolce said. “The healthier we are, the more able we are to do to ethical, good work for the long haul. I am selfishly teaching this because I want all these talented, compassionate people to be around to do this work!”

To learn more about this or any other course, email sheltermedicine.edu@vetmed.ufl.edu.