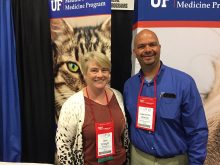 The transformation being made for animals by the Maddie’s Shelter Medicine Program at UF is a global one, and there are few better examples than the changes accomplished by Australian alum Ann Enright, BVMS, MRCVS.

Enright was working in a cat shelter in Australia when she went the to the International Society of Feline Medicine (ISFM) conference in Barcelona, Spain, in 2013. She attended the pre-conference information day, where UF’s Dr. Julie Levy was giving a session on the online graduate certificate in shelter medicine.

“Everything she was talking about was either reinforcing what I knew, or identifying what we could look at incorporating into the workplace to improve what we had in place,” she said. “I got a brochure and applied, paying for it myself as work wouldn’t.”

Enright completed the course online from Australia. “When I was in Florida attending the NAVC Conference, Dr. Terry Spencer was very helpful in organizing a ‘placement’ for me with Dr. Maria Serrano, the Chief Veterinarian at Miami-Dade Animal Services, who was also completing the certificate,” she said. “This both helped reinforce the principles, and also let me see how a busy shelter operated.”

Those lessons were of critical importance when Enright took a new position in a shelter last year. “When I started, I walked into a real mess,” she said. “January and February is right slap-bang in the middle of kitten season here in Australia, so the shelter had cats and kittens everywhere, most of them (90 percent or thereabouts) sick with URI.

“It took a few months to get some things off the ground due to other organizational issues. However, from July last year we were able to crank up the pace and are now reaping the benefits! Shelter population now hovers around 20 percent of what it was, and I have reduced the incidence of disease down to less than 5 percent, and those two kittens arrived with URI signs. We have practically run out of cats and kittens for adoption during the busiest part of the season!”

Enright said the most important thing she learned from the course was to keep the animal numbers under control. “By doing that over the past year,” she said, “I’ve been able to demonstrate to everyone just how effective it is, how you are actually able to help more cats and kittens with the same or fewer resources, and how you can even save money while doing more.”

One of Enright’s main goals is to pay forward what she learned from the UF course. “I want to be able to work with other organizations and help them improve their practices based on what I have learned so far,” she said. “And I want to thank UF and its incredible team of instructors for providing such great information, support, and ideas.”