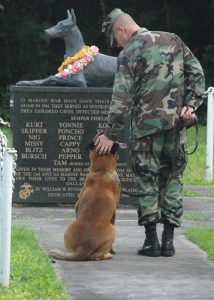 They search for explosives, protect each other, patrol territory, search for the enemy, and find drugs. They’re military K-9 teams, and they serve wherever the U.S. Armed Forces are present. And like other soldiers, their lives are sometimes lost.

There are currently around 2,700 military dog and handler teams on active duty. While the exact number of dogs who lost their lives while serving is not known, during the dedication of the war dog memorial at Camp Pendleton, the names of more than 400 teams were read during the ceremony.

There are memorials to military dogs throughout the country, including the Military Working Dog Teams National Monument at Lackland Air Force Base in San Antonio, Texas. The memorial honors dogs who served in all five branches of the service in all wars since WWII, and bears the inscription, “Dedicated to all U.S. Military Working Dog Handlers and their beloved dogs who defend America from harm, defeat the enemy, and save lives.”

The photo on this page is of Petty Officer 2nd Class Blake Soller petting his military dog, Rico, at the War Dog Cemetery on Naval Base Guam. The dog on the memorial is Kurt, a Doberman, who saved the lives of 250 Marines before becoming the first military dog to die on Guam during WWII. The inscription reads:

Given in their memory and on behalf of the surviving men of the 2nd and 3rd marine war dogs platoons, many of whom owe their lives to the bravery and sacrifice of these gallant animals.

This Memorial Day, we honor all our fallen veterans, whether on two legs or four.

Photo: U.S. Navy photo by Petty Officer 2nd Class John F. Looney. This file is a work of a sailor or employee of the U.S. Navy, taken or made as part of that person’s official duties. As a work of the U.S. federal government, the image is in the public domain in the United States.