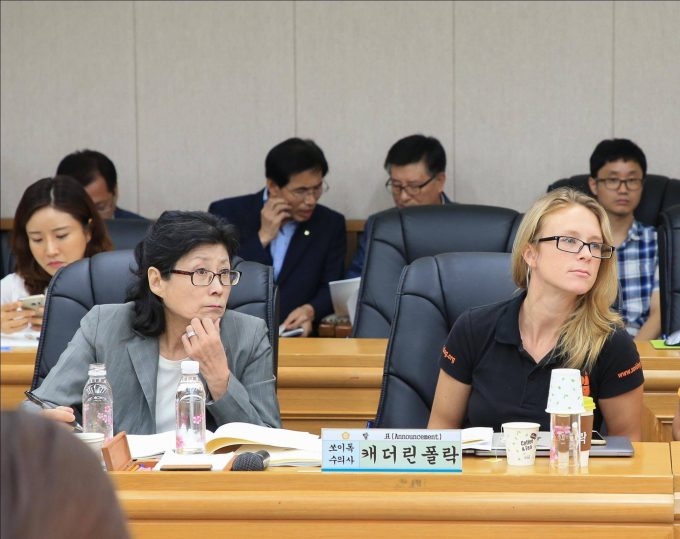 More than 2.5 million dogs are raised on approximately 17,000 dog meat farms annually throughout South Korea. While the majority of South Koreans do not routinely eat dog meat, it is traditionally consumed by some in a soup known as boshintang during the annual Boknal festival due to its ‘cooling effects’ on the body.

Maddie’s Shelter Medicine Program at UF alumn Dr. Katherine Polak has teamed up with local activist Nami Kim and Save Korean Dogs to help create the first ever dog meat-free city in all of Korea. Nami Kim has been working tirelessly to end the dog meat trade through campaigning, political advocacy, and rescue operations. In Bucheon City, a large suburb of Seoul, Nami has teamed up with Mayor Man-Soo Kim to shut down dog meat restaurants and set a precedent for the rest of the country and Asian region.

Polak has been on the ground in South Korea to facilitate the sheltering of rescued dogs and present on the public health dangers of dog meat consumption at a community forum in Bucheon City. Such dangers include cholera, trichinellosis, and increased antibiotic resistance. These are in addition to the animal welfare issues, which include inhumane housing conditions at the farms, and cruel slaughter methods including electrocution, hanging, and beating.

Following the launch of the Dog Meat Free City project in June, there are currently no more dog meat farms in Bucheon City. The city’s dog meat restaurants are currently in the process of changing their signs and menus. This is in alignment with growing opposition to the dog meat trade in the country, as evidenced by the newly elected President Moon Jae-in recently adopting a dog rescued from a farm.

“If you would like to help stop dog meat farming,” Polak said, “please sign this petition to shut down the 17,000+ dog meat farms in South Korea.”