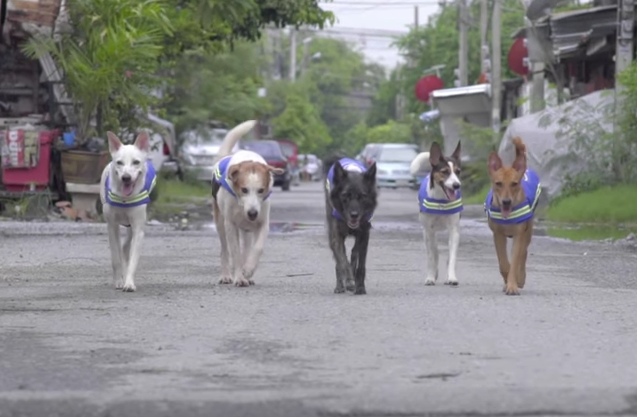 Here’s what the Foundation had to say about the effort:

We were recently approached by a Thai company called Cheil, who wanted to help us try and change perceptions of, and attitudes towards, street dogs in Thailand. The overwhelming majority of media coverage of street dogs here is negative, focusing mainly on disease and aggressive behaviour. Their idea was to demonstrate the value of street dogs in protecting people and property in the areas they live.

Many good-natured Thai citizens feed the street dogs in their area, and in return for this the dogs protect them and their homes. Cheil came up with the simple idea of fitting video cameras to street dogs, with footage streamed directly to a small team of their employees. Any sign of criminal activity or danger in the neighbourhood would be reported directly to the police.

The programme will be piloted in the Dusit district of Bangkok, and if successful will be rolled out to other districts there. We hope this initiative, entirely funded by Cheil, will go a small way to showing street dogs in a better light and slowly help to change negative attitudes towards them.

The video below outlining this program is well worth watching, but does contain some disturbing images of violence against dogs — but also an inspiring ending!