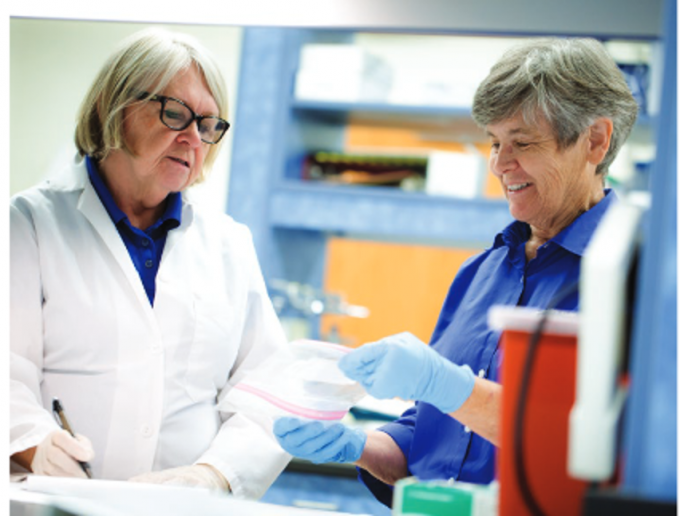 The most recent issue of Florida Veterinarian magazine interviewed our own Dr. Cynda Crawford about how the Maddie’s Shelter Medicine Program provided testing and biosecurity policies to keep the UF College of Veterinary Medicine and its patients, as well as dogs in animal shelters, safe during last year’s canine influenza outbreak.

When about a dozen sick dogs admitted to the UF College of Veterinary Medicine’s Small Animal Hospital in late May were diagnosed with a strain of highly contagious canine influenza virus — the first-ever outbreak of the virus in Florida — college officials sprang into action to alert veterinarians and pet owners throughout the state.

Experts at the college, including an assistant professor who discovered the virus more than a dozen years ago, took the lead in a response that provided important details about the virus strain known as H3N2 while debunking misinformation that was gaining traction online and elsewhere. They once again demonstrated why the college is the go-to source of reliable information and strategies when a crisis occurs among Florida’s animal population.

While the outbreak has retreated from the headlines, veterinarians around the state are still grappling with its effects.

“The state of Florida now has 100 confirmed H3N2 canine influenza cases representing dogs from 12 Florida counties,” said infectious disease specialist Cynda Crawford, D.V.M. (’89), Ph.D. (’84), who co-discovered the original canine influenza virus, known as H3N8, in 2004. “Florida has the largest number of cases compared to other states at this time, and at this time there are 15 states with confirmed cases.”

No dogs treated at UF have died, but multiple deaths associated with H3N2 canine influenza have been reported elsewhere in the state.

“The Maddie’s Shelter Medicine program at UF is currently assisting the Pet Alliance shelter in Orlando with its H3N2 situation, which involves 49 affected dogs,” Crawford said. “We are providing diagnostic testing to determine when each dog is safe to release from isolation.”

Crawford said the fact that more cases are being diagnosed and treated in Florida and elsewhere shows the level of awareness for veterinarians, dog owners and dog show participants and organizers has greatly increased.

The entire article can be read here, starting on page six.