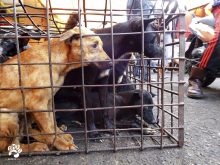 Sulawesi, a tropical Indonesian island east of Borneo, is home to world class scuba diving and beaches. It is also home to the infamous Tomohon Extreme Markets, previously listed on TripAdvisor as recommended tourist attractions. At the market, thousands of dogs, cats, and other wild protected species are brutally treated and slaughtered weekly among jeering crowds.

Rather unique to this live market is the shocking element of entertainment and showmanship, which often involves blowtorching to remove fur. Most of the companion animals involved at the extreme markets are imported from other provinces throughout Indonesia. Many dogs and cats awaiting their fate wear collars, an indication of their former lives as pets.

Recently, Dr. Katherine Polak. an alumna of the UF MSMP, was in Tomohon with representatives from Change for Animals Foundation and Humane Society International. Together they worked on a shelter consultation with the local animal welfare group, Animal Friends Manado Indonesia (AFMI). AFMI’s shelter is located only 5 minutes from the brutal market, and they are confronted daily by the blatant animal cruelty in their community. 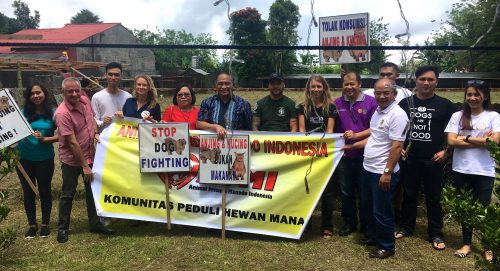 During the consultation, officials from the City of Tomohon met with AFMI and international animal welfare groups. City officials heard the argument that the sale of dog meat should be prohibited on the basis of both animal welfare issues and public health threat. Rabies is endemic in Sulawesi, and the unregulated transportation and slaughter of unvaccinated dogs undermines rabies control programs and puts both handlers and consumers at risk.

Surprisingly, city officials responded favorably, committing to end the dog and cat slaughter over time by tightening transportation restrictions from neighboring provinces. While this is promising news, said Dr. Polak, pressure from both within Indonesia and internationally needs to be continued to ensure actual change occurs.

“Dog meat is consumed by only a small percentage of Indonesians due to its predominantly Muslim population, but in a country of more than 250 million people it represents a significant industry,” she said. “While some argue that eating dog and cat meat is a cultural practice, culture is never an excuse for animal cruelty.”