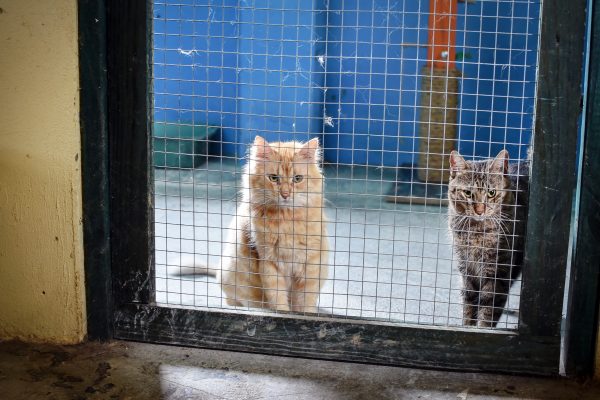 Shelter stories are rarely simple, as Dr. Julie Levy will tell you. “A shelter is a safety net of last resort,” she says. “It’s always more desirable to provide support for animals to stay in their current homes or to make adoption easier and more seamless.”

With that goal in mind, Levy, the Fran Marino Endowed Professor in the Maddie’s Shelter Medicine Program at the University of Florida and co-founder of the Million Cat Challenge, found herself and the UF shelter medicine team behind a ragged fence in Cabo Rojo, Puerto Rico.

The Santuario de Animales San Francisco de Asis – or SASFA as it is more widely known – stands as a testament to resilience, both human and animal. It has seen both tragedy and triumph in its quest to save the lives and foster the adoption of dogs and cats on the island’s west coast.

The Sanctuary was founded in 1999 when Madeline Martinez, president of the Albergue de Animales San Francisco de Asis, negotiated the use of an abandoned rum distillery to create an animal shelter. In less than ten years, and with both corporate and community support, the shelter was incorporated as the non-profit organization now known as SASFA. Every year, incremental improvements like roof sealing, fencing, painting, and water tanks allowed SASFA to continue its mission as a no-kill sanctuary.

By 2008, SASFA’s burgeoning reputation was perhaps too welcoming to the community. Shelter staff were challenged by the constant intake, and by the number of animals that were often dropped off during the night, tied to the shelter fence. The sanctuary was beyond capacity, and animals were being housed inadequately and for far too long. 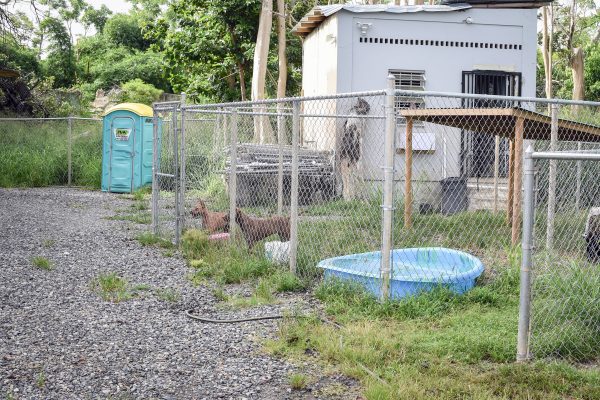 SASFA’s story might end as simply as it began, but through a partnership between Humane Society of the United States (HSUS) and the UF College of Veterinary Medicine’s Shelter Medicine program, SASFA is one of several shelters in Puerto Rico that are receiving both guidance and new knowledge on best practices in shelter medicine and management.

Passionate volunteers and leaders like SASFA Board president Dellymar Bernal and vice president Stella Ramirez, sought the advice and counsel of other shelter programs, and tried to achieve “sister shelter” status through HSUS. A visit to SASFA three years ago by Kim Alboum and Tara Loller of HSUS resulted in recommendations for running water and consistent electricity before SASFA could be accepted as a sister shelter with the Humane Society of Broward County.

A return visit by HSUS in the spring of 2017 showed real progress at SASFA, and HSUS welcomed the sanctuary into the sister shelter program. HSUS worked with SASFA to conduct “Operation Gray Muzzle,” which provided transport and adoption support for dozens of the sanctuary’s oldest residents.

In fall of 2017, the sanctuary’s progress was washed away in Hurricane Maria. Bernal, a soft-spoken librarian whose compassion for animals is both explicit and tangible, recalls the frantic efforts to make the shelter animals safe from the storm. “We moved them all to the second floor,” she said, pointing to the upper half of the primary shelter structure. “Dogs and cats together, as best we could.”

The rage of Hurricane Maria was no match for the former distillery, which was built in 1940 and stood strong, despite record-setting winds of 175 miles per hour. But wind was one thing; water was another. SASFA is bordered by a creek, which had become a rapidly rising river. Driven by wind and rain, the water rose ten feet, nearly reaching the landing of the second floor. By the time the storm had moved through, Dellymar Bernal was cut off from the rest of the world – no power, no cell phone, no knowledge of the safety of her human family. She stayed with the animals of SASFA for seven days before help arrived.

Today, the legacy of Hurricane Maria is evident. There are still downed trees and brush piles that litter the shelter property, making continued enhancement of the shelter space difficult. While running water and electricity are finally available, other creature comforts remain elusive. 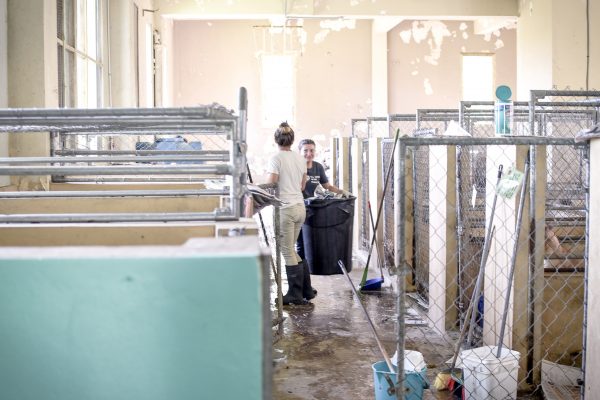 Supported entirely through philanthropy, SASFA has seen a downturn in donations with a distinct increase in requests for intake. “People are leaving the island,” Ramirez said. “They haven’t recovered from Maria, and can no longer live here and don’t want to or cannot take their animals elsewhere.”

However, the optimism of Bernal, Ramirez, and the SASFA staff endures. “The damage caused by the hurricane could have put us under,” Ramirez said. “But I believe it allowed us to imagine the sanctuary differently.”

Most compelling is the progress that SASFA is making in adopting both current and emerging shelter medicine practices.

During a long-planned trip to Puerto Rico, Levy and Inga Fricke, director of shelter initiatives and outreach for HSUS, visited SASFA last week to check on the shelter’s progress and provide more guidance – and hope – for Bernal, Ramirez, and the shelter’s dedicated staff. First and foremost, Levy is urging a stronger commitment to encouraging pet owners to keep their animals longer rather than giving them to the sanctuary, with support from SASFA for care, food, or other necessities. The impact of this message was evident during Levy and Fricke’s visit, when a visitor to the shelter asked for help in capturing and caring for a stray dog who was ill. Ramirez and Bernal gave the visitor a crash course in how to approach and humanely capture the animal, and offered a crate, food and other supplies as additional help.

“This is exactly what we hope for,” Levy noted. “By offering this kind of support, the shelter builds a good rapport with its community and reduces the likelihood that the animal will wind up in the shelter.”

Bernal and Ramirez admit that many of the shelter animals have been there far too long, and continued improvements in the physical environment as well as the shelter’s operational philosophy are a must. They are adamant about community education surrounding adoptions, and agree that making their adoption process simpler will help. Plans for physical space include clearing more of the shelter’s land to provide better exercise areas. A new storage room has food and medicine stored above typical flood level, and secure from thieves who had twice stolen the supplies in the past. Small plastic swimming pools allow dogs in outdoor kennels to play and cool off safely, and the “El Catio,” a Boy Scout troop service project, provides exercise and fresh air for the sanctuary cats, a few at a time. Levy and Fricke are encouraged by SASFA’s willingness to adapt. “Their progress, despite their circumstances, has been incredible,” Fricke said. “They are so willing to learn more and work even harder to make the sanctuary safe and healthy, and to move its animals to forever homes.”

For Bernal, it is clearly a labor of love. As she greets every animal by name, offering hugs and pets for all, she notes “they all have stories.” For the UF Shelter Medicine program, this cultural shift in the shelter’s operations and outcomes is a vital chapter. For SASFA, its ability to survive and ultimately thrive will be the best story of all.