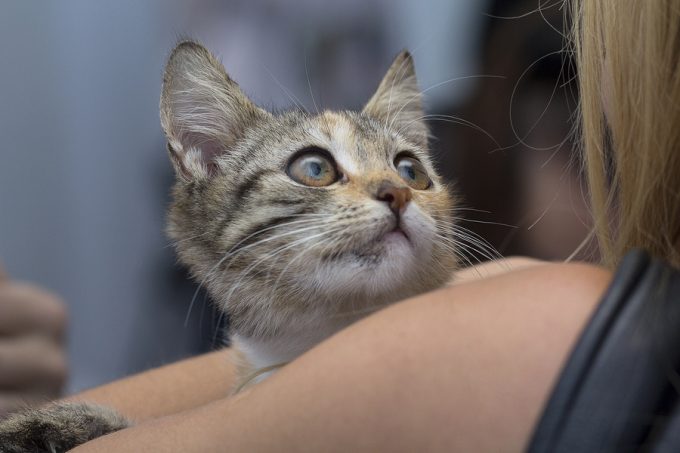 A common method of restraining cats both in animal shelters and veterinary settings is far more likely to cause them to experience stress and fear than a less restrictive form of handling.

That’s the message of a study published in Applied Animal Behaviour Science. Noting that “veterinarians and non-veterinarian staff commonly use restraint involving immobilization for examinations and procedures when handling fearful and aggressive cats,” and that such handling was associated with a number of markers for feline stress and fear, Dr. Carly M. Moody of the University of Guelph went on to co-author the paper, which validates the negative effects of full-body restraint compared to passive restraint.

Full-body restraint is defined as the cat being “held on its side with its back against the handler, while the handler grasps the front and back legs, with a forearm across the cat’s neck. The cat is allowed little to no movement of its head, body or limbs.”

Passive restraint, on the other hand, is defined as the cat being “held lightly with the least amount of restraint possible, in a position of the cats choosing (standing, sitting or laying). The cat is allowed movement of its head, body and limbs.”

Unless veterinarians have special training or certification in Fear Free, Dr. Sophia Yin’s Low Stress Handling, or AAFP/ISFM Feline-Friendly Handling Guidelines, the study authors wrote, full-body restraint is a common method of handling cats both in veterinary practices and in animal shelters. Given increasing concern over the relationship between stress and illness in cats, as well as a desire to improve animal welfare and prevent suffering, the study sought to identify the physical signs demonstrated by cats being handled in different ways.It is the first scientific validation of responses to negative handling in cats

Working with 51 healthy shelter cats who had been in the shelter for at least one week and were available for adoption, the study compared the two methods of handling and found: