A community still recovering from a massive natural disaster is struggling with the displacement of pet owners and pets it caused. Last weekend, with the support of Petsmart Charities, the University of Florida and Operation Catnip teamed up with ten Panhandle animal organizations to help spay and neuter more than 200 cats and dogs.

When Hurricane Michael hit the Florida coast in October of 2018, it was the most powerful Atlantic hurricane in 49 years, and the third most powerful in history. Few places were as devastated by that historic storm as the Florida Panhandle.

“You have apartment complexes that are ghost towns now,” said Dr. Larry Garcia, a clinical assistant professor in shelter medicine at UF who served as event coordinator and volunteer surgeon. “Many of the people had to leave their animals behind, and those animals need rehoming because their former owners are often still displaced. People in the community are still whirling from what happened. What you once knew is no longer, from the missing trees to general damage and destruction.”

Petsmart Charities had been working with the stricken community for months, and reached out to the University of Florida and groups around the state to support a two-day spay/neuter event. It took place at Operation Spay Bay, a low-cost spay/neuter clinic serving pet owners in the Panhandle. 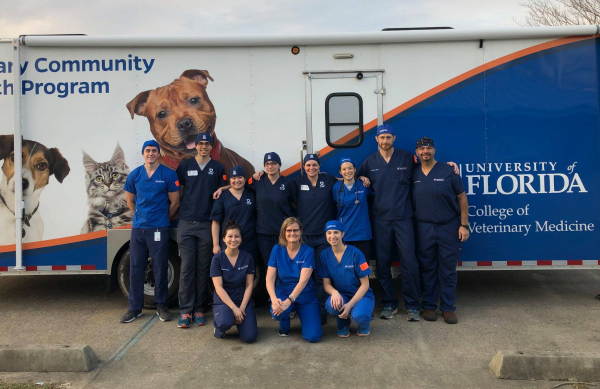 “They were actually shut down for six weeks after the hurricane,” said Garcia. “Twenty percent of their roof was ripped off — the section right over their surgery suite, in fact. They’ve just now finished replacing the roof. They’ve also retrofitted a mobile home in their parking lot and turned it into an area for prep and recovery as well as two surgery suites. They’ve been doing spay/neuter for local shelters and rescue groups. It’s a really strong organization that does a lot of good in the community, and we were honored to have the opportunity to help them get a leg up on the local situation.” “The pets were a mix of animals belonging to owners displaced from their homes by Hurricane Michael and animals who have been waiting for sterilization so they can be adopted,” Garcia said. “One of the groups was able to hold an adoption event because of the spay/neuter service being offered last weekend.”

Operation Catnip’s Audrey Garrison observed, “This is often called Florida’s ‘Forgotten Coast,’ and they don’t have a lot of resources at the best of times. Operation Spay Bay doesn’t have a lot of what we take for granted in the Gainesville area. But they were fabulous; we couldn’t have asked for a better partner.”

Garrison said everyone involved, from volunteers to veterinary students to surgeons, pitched in to help in any way they could. “Dr. Chris Adin is Professor and Department Chair of the UF Department of Small Animal Clinical Sciences, but you’d have thought he was a student,” she said. “He was washing instruments, helping move pets through to surgery and recovery, doing anything and everything that was needed. Dr. Levy and Dr. Garcia were the same.” 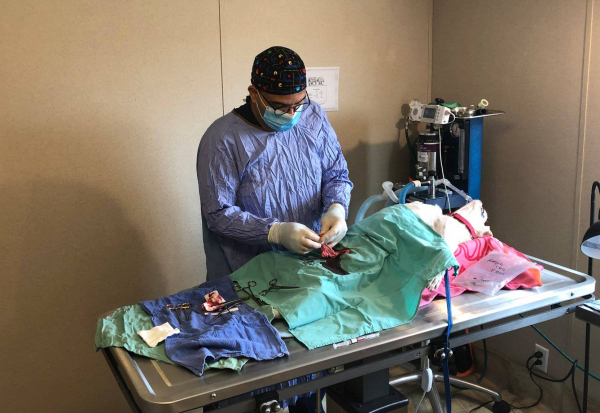 Veterinary students were particularly excited to be part of the two-day event, Garrison said. “The students loved going with us, and were very excited at the opportunities they had to see and do things they wouldn’t normally get to do, and the impact they were able to have. I think it really opened their eyes, for example, when they heard from the transport volunteer from Hope for Santa Rosa County that they had brought in 60 cats from their community, but had turned away 54 for lack of capacity.”

That was exactly how Alyssa Middleton, a class of 2022 DVM candidate in the UF College of Veterinary Medicine, felt.”I was excited to join the trip because I believe in the mission to do our part in controlling pet population numbers, and in volunteering our skills to assist groups that work to create a better life for shelter and rescue pets. I enjoyed working with the team and appreciated them taking time to work with me to improve my clinical knowledge and surgical skills.”

Corey Fisher, a class of 2021 DVM candidate, agreed. “It was a great opportunity to help Panama City recover from Hurricane Michael while gaining unique experience in mobile high volume high quality spay and neuter operations,” she said. “I felt like I got to be part of the something bigger than myself that truly gave back to the animal shelter community.” 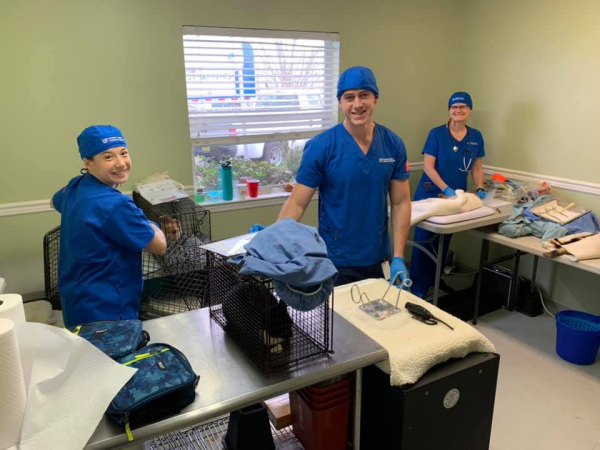 The weekend spay/neuter event came together thanks to the leadership and support of Petsmart Charities. They also donated the UF mobile spay neuter van that was on site to augment the Operation Spay Bay facilities. Dog surgery was performed in the converted mobile home, and the regular Operation Spay Bay building was used for prep and recovery for the cats. Feline surgeries were performed in the UF mobile unit. 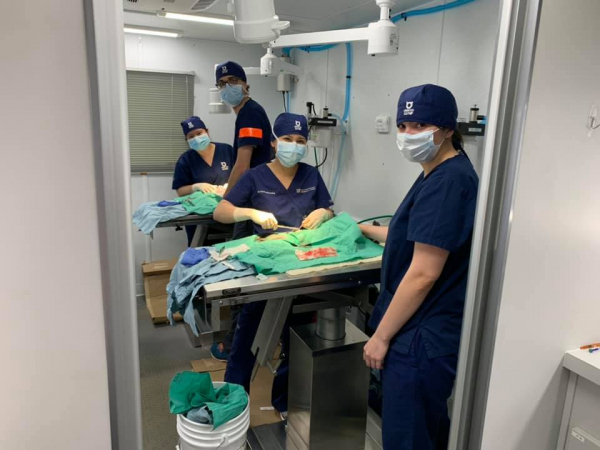 “In our team, we had a mix of around a dozen students, volunteers, and UF faculty,” said Garcia. “Operation Spay Bay had a full complement of around a dozen technicians and sterile supply staff preparing for surgery, as well as administrative support handling records and rabies records. That’s a pretty big group to manage such a massive undertaking, I was inspired and awe-struck to see how seamlessly it went off. it was really amazing to see what appeared to be such chaos have such a positive outcome.”

He added, “Coming together to help this community recover from the hurricane: That’s what it’s really all about.”