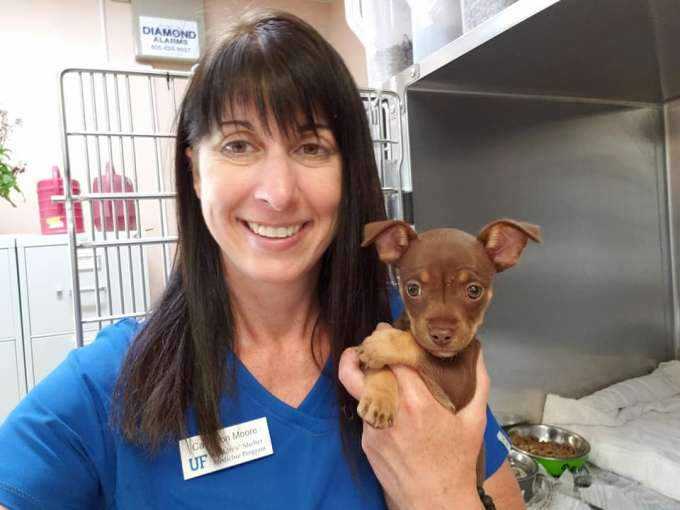 What story does data tell us about what’s happened for Florida’s shelter animals since 2013? A pretty inspiring one!

In 2013, the Florida legislature enacted a statute mandating the public reporting of animal shelter data. UF has also begun collecting its own shelter data in conjunction with Shelter Animals Count. At the recent Florida Animal Control Association​ Conference, Cameron Moore and Chrissy Sedgley of the Maddie’s Shelter Medicine Program at UF gave a State of the State presentation based on that data and shared good news: Shelter intake is down, live release is up, and feline live release is way up. Total shelter euthanasia is down 61 percent since 2013. Adoptions, transfers, and return-to-field have all increased.

That represents at least 112,000 fewer animals having been euthanized, with data in from only 58 of 67 counties for last year. “We’re still getting numbers from the last few, mostly in the Panhandle area affected by Hurricane Michael,” Moore said. “This presentation was a snapshot in time, and we’ll have a full report this summer.”

The impact of the positive trend on shelter workers and conference attendees is huge. “The audience was incredibly excited,” Moore said. “They’re seeing their hard work is paying off. It’s still hard every day, but less hard then when they were taking in twice as many animals and euthanizing so many more. People are finally seeing a light at the end of the tunnel.”

Giving the report and interacting with people in the audience was a big boost for Moore, too. “I’ve seen these same leaders year after year at these conferences, and it’s so inspiring when they can come in and brag aobut the positive changes in their community, and the best practices they’ve implemented.

“Then they share it with shelters in their neighboring county, who says that sounds crazy, and they say we thought so, too — but it worked! The people holding out are fewer and fewer. Somtimes peer pressure is what it takes to get them to change and overcome resistance.”

What’s more, she said, it’s sometimes the people who resisted the most at first who become the best ambassadors for change.

Enthusiasm was high in the exhibit hall, too. “There were 60 Florida counties represented at the conference,” said Moore. “We may not have talked to someone from every one of them, but we tried! We asked people we’d worked with what was going on in their community, then introduced them to people at other organizations who were starting programs similar to the ones the first organization had been using. It’s a lot more powerful to connect them with their peers than just telling them what they should do.”

Moore and Sedgley also took the opportunity to recruit for the Million Cat Challenge, and promoting the Challenge’s pro bono assessments for Florida shelters, “Only 20 counties aren’t in the Challenge yet,” Moore said. “We talked to them all!”

The pair also moderated a panel discussion on managed intake, something that used to be highly controversial but was well-received by the audience.Tactics like surrender prevention and safety net programs were incredibly popular. “Panelists were actually writing down new ideas they heard from other panelists and from the audience,” Moore said. “Progressive approaches and new ideas are becoming the norm now in Florida. If you hear about new approaches often enough from your peers who have implemented them successfully, it can help overcome resistance to those new approaches. And in Florida, that’s adding up to a whole lot of animal lifesaving.”