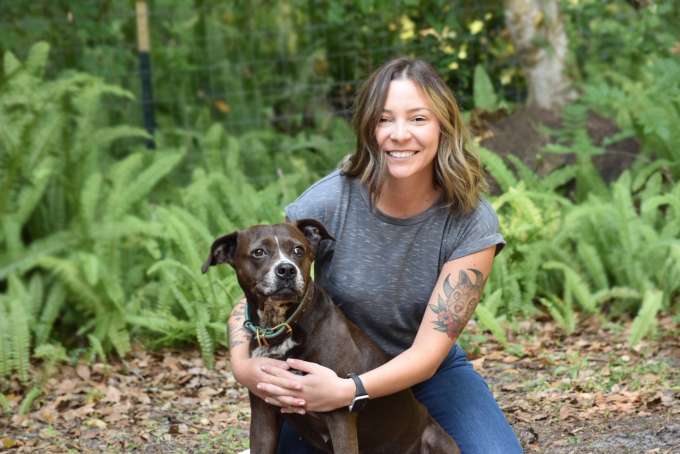 If you went to your own animal shelter or rescue group to adopt, would you pass the screening process? One shelter operations manager wanted to challenge her team’s attitude toward adopters and submitted an adoption application without using her name. When she was turned down, she used that experience to launch a complete culture change at the shelter, and earn her Master’s Degree in Shelter Medicine in the process.

That shelter operations manager is Chrissy Sedgley, now Educational Programs Manager for the Maddie’s® Shelter Medicine Program at UF. The research she conducted as part of her Master’s Capstone Project – including the adoption experiment – was intended to challenge the myths that serve more to create barriers to than to facilitate pet adoption.

“A lot of shelters battle with negative views of the public, especially when it comes to animals being returned or adoptions not working out,” she explained. “At my shelter, I observed that both staff-to-staff and staff-to-public communications were extremely negative. Animals would be returned and our staff or volunteers would say ‘adopters are terrible’ or ‘people are terrible, they should never adopt again.’”

It’s not that Sedgley didn’t understand this attitude; she did. As she wrote in her Capstone report, “The moment our cherished cats and dogs leave the building, a whole host of negative thoughts instantly flood the mind and are only confirmed when an animal is returned a week later for a behavioral issue. It was easy to see how shelter staff could become more and more jaded toward adopters until they become over capacity with long-term residents because no family is deemed fit to care for the animals the way we’d like them to.”

But, she asked, “How is a shelter supposed to continue saving lives if they don’t consistently place animals into new, loving homes?”

Determined to open her staff’s eyes to the impact of their existing attitude toward adopters, Sedgley decided to try an experiment. She filled out the shelter’s standard adoption application, at the time, a four-page document, but left her name off it.

“I gave it to our staff and said, ‘Okay, should we adopt to this person? Why or why not?’ We went through the whole application together, as a team, and collectively the staff decided to deny the adoption. And that’s when I told them that the potential adopter was me.”

The staff was shocked. “I was 100 percent honest in the application,” she said. “I  listed previous pets who had escaped through my broken fence and sustained injuries, the community cats with unknown vaccination history who I was feeding, and the work hours I spent away from home. And after their shock wore off, they began to realize that stories like these are not uncommon. That even they had endured tragedies and learned from their experiences and that these things don’t mean someone is a bad pet owner; they mean life happens to everyone, and no adoptive home is ‘perfect’ according to some of the standards we aim to uphold– including our own.”

The experiment also demonstrated that the staff’s view of the public and the shelter’s policies weren’t serving them, and needed to change. “We were offering so many resources to our community,” she said. “We had a low cost spay/neuter clinic, a pet food bank, and a low cost vaccine clinic. But we were turning around and being so judgmental toward the people coming to adopt from us. If we wouldn’t let these animals go into those homes, how would we ever think that any of these other resources that we were offering were going to be successful?”

Over a one-month period, Sedgley held meetings with her team twice a week, digging into topics like why people return adopted pets, adoption marketing, and communications skills. And at the end of that process, she tossed out the shelter’s existing adoption application and replaced it with a questionnaire intended to create an open, conversation-based adoption process that would lead to more successful outcomes for both people and pets.

Sedgley didn’t stop with challenging her team’s beliefs, however. Utilizing what she was learning in the shelter medicine and non-profit leadership courses as well as progressive sheltering concepts developed in HSUS’s “Adopters Welcome” program and a seminal blog post and conference presentation by the ASPCA’s Emily Weiss,  she launched what she called a “journey to open adoptions through culture change.”

The first step in that culture change was making the staff part of the process. “You can’t go from one day doing x, y, and z, and the next doing z, y, x, and expect everyone to be on board,” she said. “It was important for me to include the staff members and the volunteers in what was a gradual transition. We talked about why we were making the decisions we were making and how they were serving our overall mission, instead of just changing them without consultation or making them part of the process of change.”

Because the Capstone project required a research component, Sedgley focused on a specific, data-centric issue: the return rate of pets adopted from the shelter before and after the culture change.

“That was the area where staff members were the most judgmental,” she observed. “If animals were returned for any reason, they assumed it was the person’s fault, and they were never allowed to adopt again. And I realized this was not helping our cause at all. We have adoptable pets. That means we need adopters, and that means we need to support thos adopters, not attack them.”

Sedgley looked at the shelter’s rate of returns prior to the process overhaul and staff training sessions, and compared it to the rate of returns afterward. Perhaps to many people’s surprise, those changes led to increased adoptions with return rates decreasing. They also had another benefit: a reputation boost for the shelter.

“The feedback we were receiving from adopters changed after we changed our policies,” she said. “Just perusing Facebook or Google reviews, you could see that one day, people had a really negative view of the shelter. They said we weren’t helpful, we were mean, we were judgmental. And then almost overnight, it changed to people saying they loved us, that our staff really knew the animals in the shelter and helped them make the perfect match. It was a complete 180 degree turn by the public.”

Sedgley got her start in animal welfare as a humane society receptionist working closely with the public in an adoption and foster coordinator role. She also served as a veterinary technician, deploying for local and national animal welfare organizations in disaster and cruelty cases and eventually as the shelter’s director of operations. What inspired her to pursue first a certificate course and then a Master’s Degree in shelter medicine?

“When I learned the educational opportunity was open to shelter administrators as well as veterinarians, I was definitely really intrigued by it,” she said. “Non-veterinarians were able to incorporate nonprofit leadership or public health certificate courses in the Online Master’s Degree Program, so I combined the nonprofit courses with the core shelter medicine courses to obtain my Master’s. And because I was in the Director of Operations role at the shelter during that time, I was able to directly apply what I learned to my work day-to-day. I was implementing homework assignments in the field, and could see the changes happening in real time.”

Today, Sedgley has taken her career in animal welfare to yet another level. Having received her Master’s in 2017, she now works with veterinary students in the Maddie’s shelter medicine program, sharing her in-the-trenches sheltering experience with them as an advisor and part of the UF shelter consultation team.

She also has a dream that grew out of both her time at UF and in the shelter. “It’s my hope that this new era of open communication and research into the effect of shelter policies on adoption and community relations will lead to lasting change in the sheltering or rescue environment,” she said. “I want to see animal shelters become family-oriented, welcoming, and most of all fun havens for both people and pets.”