You’re probably familiar with the practice of ear-tipping community cats to identify them as having been spayed or neutered. Would it surprise you to know that since 2010, the Association of Shelter Veterinarians’ Veterinary Medical Care Guidelines for Spay-Neuter Programs has also recommended “the use of a simple green linear tattoo to identify all neutered pet animals”?

The fact that sterilization indicator tattoos are not well-known or universally utilized even in shelters prompted Dr. Meaghan Mielo to survey shelters, spay/neuter clinics, veterinary colleges, and private veterinary practices about their awareness and use of the tattoos for her Maddie’s Shelter Medicine Internship research project.

“Dr. Julie Levy and I decided to do this research earlier this year because we noticed many shelter vets were frustrated at how frequently we end up doing unnecessary surgery on an animal who turned out to be already spayed or neutered,” said Dr. Mielo. “Not only does doing an exploratory surgery disrupt the surgical flow of the day, but it’s a much more complicated and lengthy procedure.”

She continued, “Additionally, there’s always a risk with anesthesia, and there’s always pain associated with surgery. So if we can find any way to prevent those two things from happening in our patients, I think it’s our responsibility as veterinarians to do that.”

Dr. Mielo reported on her research findings as part of the shelter medicine track at the 2019 American Board of Veterinary Practitioners Symposium held in Denver, Colo., on Oct. 11.

Her first survey asked all 33 veterinary schools in the United States and Canada whether they educated students on the tattoos in didactic courses, surgical laboratories, and clinical surgery programs. The second survey was distributed to private veterinary practices, animal shelters, and spay/neuter clinics and asked about the frequency and other characteristics of tattooing in client-owned and shelter/rescue cats and dogs. More than 400 practices representing every state in the U.S. responded to the survey, as did every veterinary college in the U.S. and Canada.

“Every school at some point has students exposed to either tattooing or ear tipping, but it’s very inconsistent even within one school,” said Dr. Mielo. “For example, they may have a required surgery lab where the students are doing surgery on shelter pets, so they tattoo those animals. But then in surgery lectures and in surgery rotation in the teaching hospital, they don’t perform the tattooing. It’s really inconsistent training for students, which leads to confusion and lack of buy-in after graduation.”

Among the survey findings: 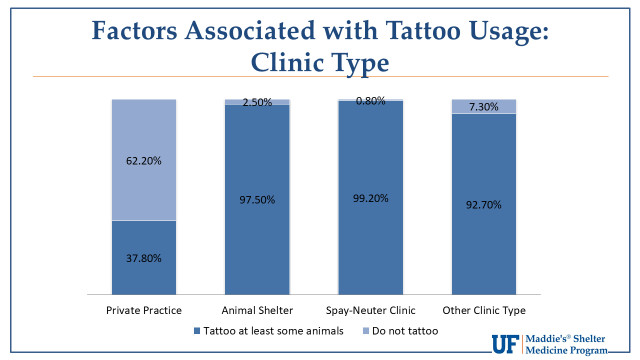 “Going back as far as 1976, the AVMA has recognized the importance of spay/neuter tattoos, but it still hasn’t become common practice in veterinary medicine,” Dr. Mielo said. “But back then, they were recommending really big tattoos, where it was the male or female symbol with an X through it, which really was intrusive. What we’re recommending is just a little 1.5 centimeter green line on their bellies. Once their hair grows back, you don’t even see it.”

Examples of Spay and Neuter Tattoos on Cats and Dogs

So what do the tattoos look like, and where are they commonly placed? Here are a few examples from Dr. Mielo’s records: 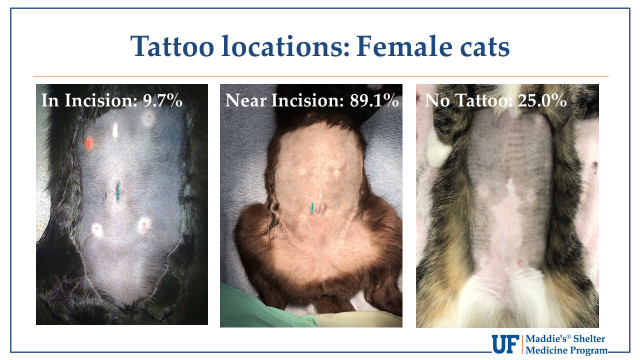 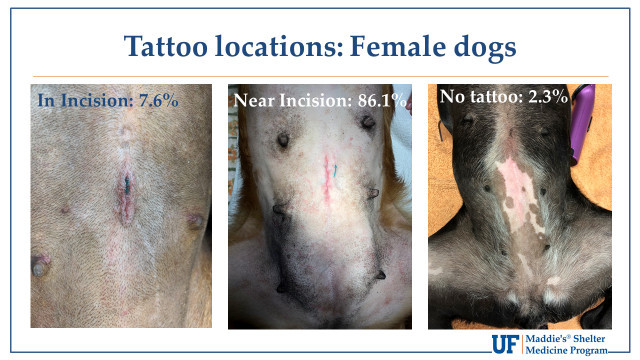 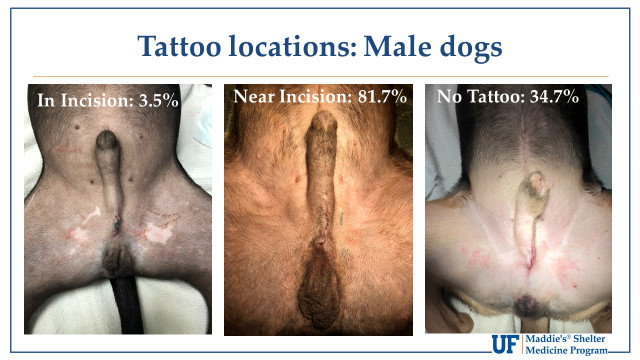 Dr. Mielo hopes to see the day when neither she nor any other shelter veterinarian has to wonder about the sterilization status of a pet entering their facility. “Opening up a female dog or cat and finding out she was already spayed has certainly happened to me often enough to know that it’s a problem,” she said. “Or I’ll shave the abdomen and see what looks like a scar where a spay incision would be. In that situation, I’ll often tell the owner, or the adopter that I believe the pet is spayed, but they should monitor for signs of heat and bring her back if they see them, because I can’t guarantee it.

“I know it always makes me happy when I find a tattoo on an animal, because I know then I don’t have to wonder, or put them at risk for no reason.”

Now a staff veterinarian at Citrus County Animal Services in Inverness, Fla., Dr. Mielo hopes to expand her research in the future to include pet owners attitudes about sterilization indicator tattoos, as well as to quantify the incidence of presentation of already-sterilized animals for spay/neuter surgery.

You can support shelter medicine education and research by making a gift to Maddie’s® Shelter Medicine Program today!