Florida’s animal shelters collectively pushed dog and cat lifesaving to a new milestone in 2019. While overpopulation of pets is rampant in the southern United States, Florida broke away from the pack to save 81 percent of the animals who came into the care its shelters. That number rose to 84 percent if 12,645 animals brought to shelters specifically for euthanasia services were not included – a jump of 27 percent since 2013. 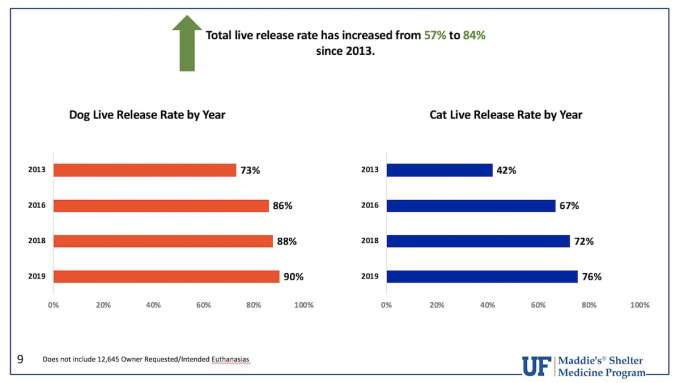 Unlike many other states, the state of Florida does not maintain a registry of shelters or centralize the collection of shelter animal data. This makes it impossible to track the state’s progress in animal lifesaving. To fill the gap, the research team at Maddie’s Shelter Medicine Program at the University of Florida created the first directory of animal shelters in 2013.

“At that time, the outcomes of shelter animals were largely clouded in secrecy, creating distrust between communities and their local shelters and stymying collaboration that could save more lives,” said Dr. Julie Levy, the study leader. “So we recruited a team of volunteer veterinary students to help us pour through intake and outcome records from shelters across the state, aided by a new state statute that required shelters to release their data for the first time.”

In 2013, the live outcome rate for cats and dogs in Florida shelters was only 57 percent, meaning that barely half of the animals entering the system were saved. Now, six years later, more than 8 out of 10 are saved, approaching a milestone of 90 percent that many shelter leaders view as an indication of positive community lifesaving capacity.

Shelter animal lifesaving in Florida is driven by a commitment to adopt innovative programs that help keep animals safe in their own homes, minimize the time spent confined to shelters, and remove barriers to adoption. Integration of trap-neuter-return programs for free-roaming unowned cats has been pivotal in reducing the number of cats brought to shelters.

How many cats and dogs are admitted to shelters each year and what happens to them? 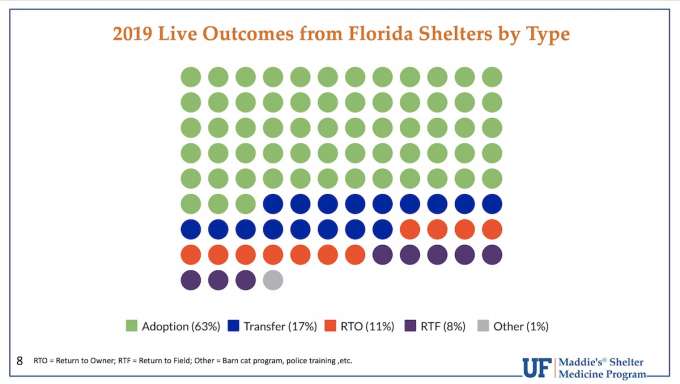 Not all of the news was welcome. Shelter animal intake and euthanasia varied widely across the state. Although per capita euthanasia tended to be highest in rural counties where resources are scarce, some metropolitan areas also struggled with high euthanasia numbers. 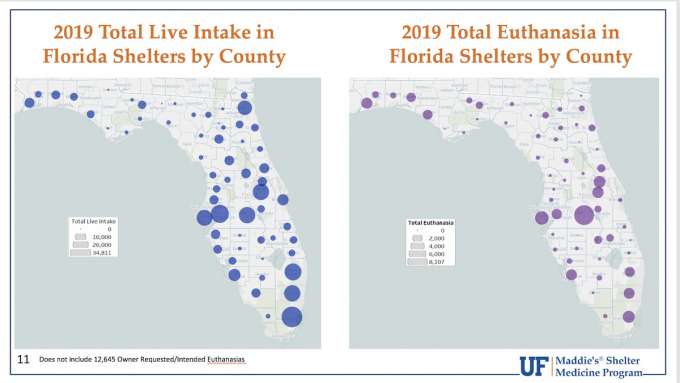 In another disappointing finding, a higher risk of euthanasia for cats that was first identified in 2013 persisted through 2019:

“Solving the problem of feline overpopulation will require that shelters double down on prioritizing programs that serve cats, including trap-neuter-return programs that solve the problem at its source, return-to-field programs that sterilize and return healthy shelter cats to their neighborhoods, and adoption promotions that quickly place cats with loving families to avoid prolonged stays in stressful shelter environments,” said Dr. Levy. “The COVID-related shutdown of spay/neuter programs right at the beginning of the spring ‘kitten season’ is likely to jeopardize some of the hard-won gains made for cats in recent years.”

Help for shelters is available, thanks to Maddie

Through a generous grant from Maddie’s Fund in partnership with the Million cat Challenge, the Shelter Medicine Program at the University of Florida can provide pro-bono consultations to help shelters identify opportunities to boost lifesaving and public services without increasing costs. Shelters can apply for anything from a video chat about a specific topic to a full-blown top-to-bottom on-site shelter assessment.

Dive into the detailed statewide data at Florida Shelter Animal Census: A snapshot of statewide intake and disposition.