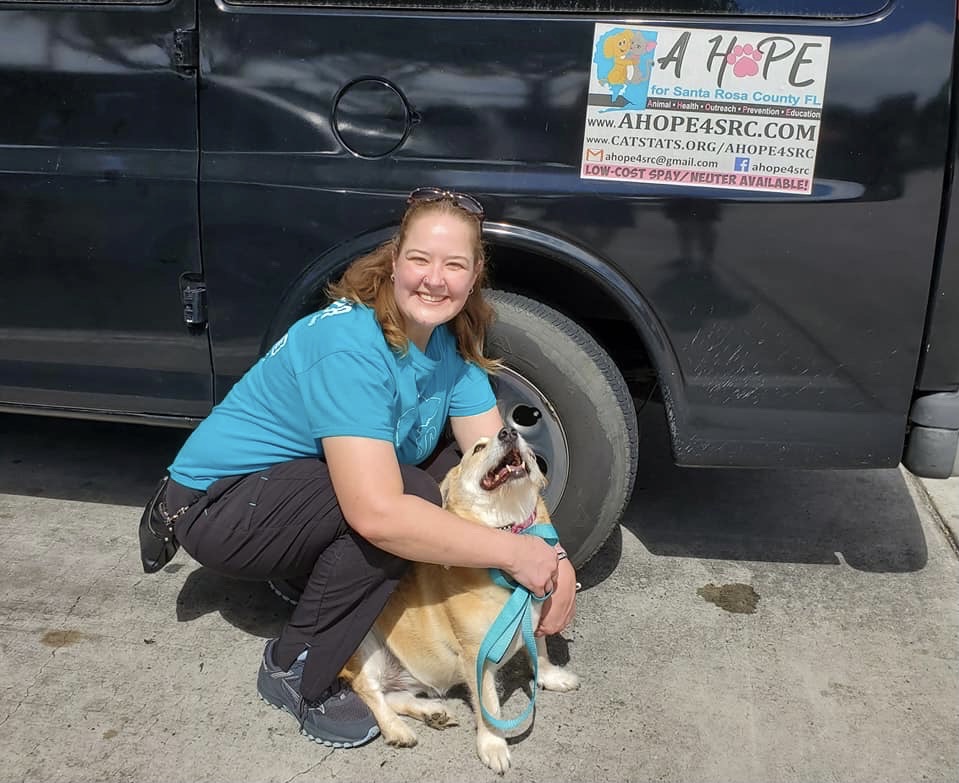 How does a whole county’s animal sheltering program get turned around? Sometimes it takes just one person with a vision who finds a way to change people’s hearts and minds through creative presentation of statistics and emotionally hard-hitting messaging.

Not creativity as in ‘lies, damn lies, and statistics,’ either, but in helping people to see what’s happening with shelter animals, where, and why through use of colorful graphs that are easy to read and understand. But pretty charts aren’t the whole story. Here’s how Brandi Winkleman, president of A HOPE in the Florida Panhandle’s Santa Rosa County, opened eyes and saved animal lives one step at a time, through community and county government buy-in and help from the Maddie’s Shelter Medicine Program at UF.

It all began in 2013 when, as a shelter volunteer for Santa Rosa County Animal Services, she was sharing statistics on social media every month about the numbers of animals coming into the shelter and the numbers that were euthanized.

“I realized that people weren’t really commenting on them too much,” she said. “It was almost like they didn’t understand.” She started breaking down the statistics further and making colorful graphs to illustrate the numbers. “That’s when people started really paying attention.”

Before that, she had been surprised that more people didn’t seem to be concerned that 4,000 to 6,000 animals were euthanized in the community annually. In 2015, for instance, 4,462 animals were euthanized, compared to only 1,687 reclaimed or adopted. The numbers were slightly improved in 2016 and 2017, but the fact remained that more animals left the shelter dead than alive.

The charts helped community members recognize the extent of the problem. They started getting upset and getting loud about it.

In 2017, when she started A HOPE — which stands for Animal Health Outreach Prevention Education —t he county’s euthanasia rate for most months was 60 to 80 percent. For cats and kittens, it was almost always 90 percent or higher. That year, more than 4,000 of the 6,000 animals coming into the shelter were euthanized.

“They were coming in there and they were dying because people weren’t aware,” she says.

When she presented her data, making it visual, both community members and commissioners were motivated to make changes.

Normally, the county commissioners might have expected to have been asked for money to throw at the problem. But Winkleman didn’t do that. Instead, she presented a plan for how to address the problem, one that didn’t ask for additional funds. That surprised the commissioners.

Winkleman explained: “It’s not your job just to pay for us to get out of this. We need everybody to just change the way we’re looking at the situation.”

That began with addressing discriminatory attitudes toward particular breeds. Winkleman is a numbers person, but she also knows how to tell a story, and she does her homework.

Six breeds were not permitted to be adopted out by SRCAS. If they were brought into the shelter and were not claimed in seven days, they were euthanized.

Winkleman displayed a picture of her dog Dodger. He’s black and tan, with a large head. She asked what kind of dog they thought he was. Rottweiler and Doberman were among the guesses. Then she showed his DNA test results: 50 percent Labrador Retriever, 25 percent Staffordshire Terrier, and 12 percent Pekingese.

“He’s the best dog in the world. I’m thankful I have him,” she said. “But at 7 weeks old, he was set to be euthanized because he was labeled as a Rottweiler. Unless you’re going to spend $100 to DNA test every single dog in there, you have no right to label what each of these dogs is, and that’s not fair.”

It was a policy the commissioners were unaware of. One of them had a Doberman Pinscher himself, something Winkleman had discovered beforehand. Dobermans were among the six breeds euthanized if they weren’t claimed. He was upset.

“We’re doing this here?” he asked.

During the same time, A HOPE worked with Milton, the city inside the county, to establish a trap/neuter/return, or TNR, ordinance. In 2019, TNR was approved for the entire county. The shelter agreed to bring in an assessment team to help identify opportunities to implement lifesaving practices.

“We did a pro bono assessment of the Santa Rosa shelter in November of 2018,” said Cameron Moore of the Maddie’s Shelter Medicine Program at UF. “At the time, they had one of the lowest save rates for cats that we had ever seen — just 8 percent. Dogs were doing better at 67 percent, but with an overall live release rate of 32 percent there were a lot of opportunities for improvement.”

The team recommended ways to save more animals while not spending any extra money, but simply reallocating what was available. Combined with the TNR program, the changes made a difference, taking SRCAS from a 90 percent euthanasia rate in 2017 to 30 percent two years later. “It was huge,” Winkleman said. 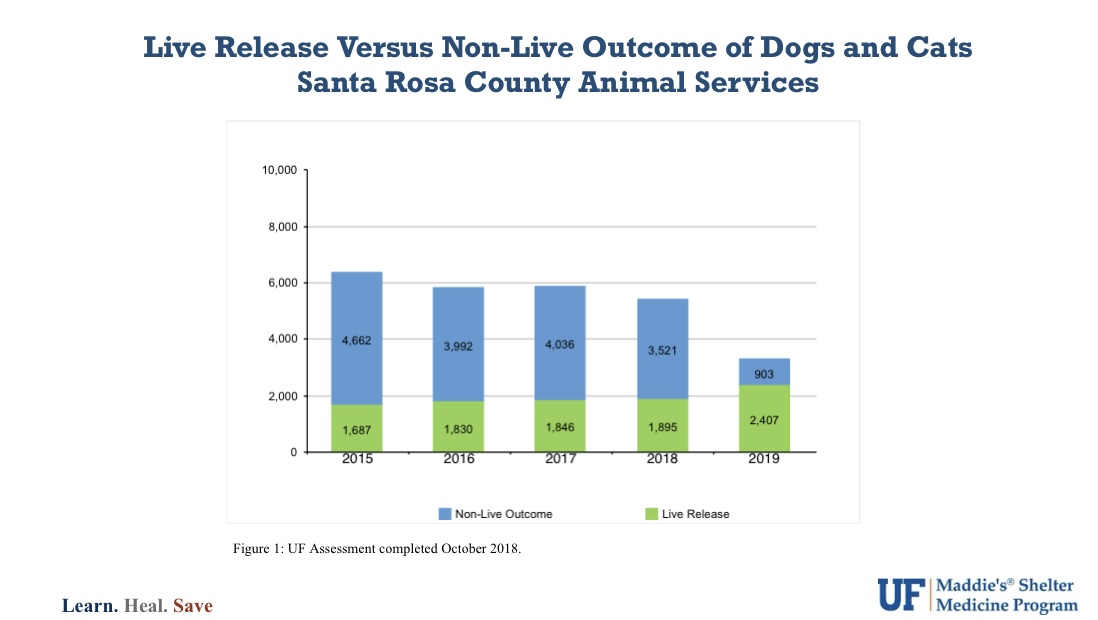 But their success wasn’t just about the numbers. It was about changes in mindset that Winkleman could see happening on social media. Commenters went from bashing the shelter to offering ways people could help or keep their animals instead of taking them to the shelter. They suggested rescue groups and fostering tips. They stepped up to help care for the pets of people who were moving until they could get settled and bring their animals to their new home.

“You could see the mindset start changing tremendously online, and I think that was the biggest thing that really turned it around for our county,” Winkleman said.

She asked her own employees and volunteers to keep things positive.

To maintain that attitude, she stops to think about what a person really needs — the need behind the ask. Because what they’re asking about isn’t necessarily what they want. Conversations and communication are key to finding the best way to help.

A HOPE’s motto is “Solve the problem, save lives, inspire others.” Nowhere was that more evident than the time a woman came in, crying and upset, saying she needed to give up two of her cats. She couldn’t afford their veterinary care, they had fleas, and they were fighting.

In her mind, Winkleman envisioned 20 cats in the home, all fighting and killing each other. In reality, the woman and her husband had only four cats. One was new and another cat was getting testy about the intruder. Only two of the cats needed veterinary care. But the woman and her husband were being eaten up by the fleas and it was causing disagreements between them. Covid had just hit and they were having financial problems. She couldn’t afford to feed all of them.

“I think in her mind it just piled on,” Winkleman says. She realized she could fix everything without the couple having to give up any of their cats. She filled a bag with cat food, flea preventive, and some Feliway plug-ins. She asked the spay/neuter coordinator to email information on getting two of the cats altered and vaccinated. It took 10 minutes.

“It was something so simple for me,” she said. The woman said, “I came here today thinking I was going to give up my two cats. I had no idea my day was going to turn out like this.” She spent the rest of the day outside, telling potential adopters how she had been helped and how happy she was.

A help desk, run entirely by volunteers, is part of A HOPE’s program. Whoever is available will return calls, emails or texts, answering questions about getting pets signed up for vaccinations, spay/neuter surgery or other veterinary needs, or providing advice on ways they can retain their animals instead of bringing them to the shelter. As an animal advocacy and welfare group, A HOPE’s goal is to help people keep their animals, and to help place animals in need, reducing intake at the shelter. That includes having 40 to 50 kittens in foster homes at any given time.

Next on the agenda is building a veterinary clinic on 25 acres the organization owns so they can provide low-cost care for pets in need. The pandemic and hurricanes have put a kink in the fund-raising pipeline for now, but it was the original purpose behind A HOPE and Winkleman knows it will get done when the time is right.

The words “We’ve always done it this way” are her cue to say, “That’s not going to work, so let’s do this instead.”

She has also been willing to bear the responsibility for complaints and changes. Along the way, she made bargains. “Let’s just try TNR. If it doesn’t work and there are more cats and complaints, put it all on me and stop it completely.”

She had complaint calls sent to her cell phone so she could speak directly to people’s concerns. She committed A HOPE to paying for any cat-related damage issues citizens might have.

“I think a big part of things is having so much faith in yourself that you’re willing to convince other people to try it, too,” she said. And if they weren’t willing to try something, she did it herself and showed that it worked.

That attitude has led to many new programs. The county shelter now has a foster program; a volunteer program; a barn cat adoption program; and a Doggy Day Out program that gives shelter dogs a vacation from the shelter so they can enjoy outings in the community and get some social interaction and maybe even a chance at adoption.

“Brandi Winkleman is a Panhandle hero,” said Moore. “All of us at UF are so grateful for her selfless dedication to helping animals across her region. She is truly a lifesaver.”

By 2019, the charts had changed. That year, 2,407 animals were adopted or reclaimed, while 903 were euthanized. Those numbers demonstrate not only higher live-release versus euthanasia rates but also the reduction in the number of animals entering the shelter.

In the end, it’s all about speaking the language of the other people involved. Saying that kittens are cute so they shouldn’t be euthanized isn’t enough. Go to the heart of their interest, whether that is financials, statistics, or love of tortoiseshell cats. Show them the budget, the data, the number of tortoiseshells that die in the shelter each year.

Said Winkleman, “We’re going to focus on different things to hit different aspects because you have to speak their love language.”