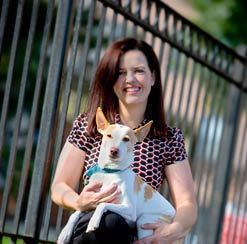 Dr. Sheila Segurson D’Arpino is the Director of Research at Maddie’s Fund.  In this role, Sheila leads Maddie’s Fund research programs and the Fund’s foster-based adoption program which was founded in 2014.

Sheila first became involved with animal sheltering in 1987 by volunteering for the San Francisco SPCA’s behavior department. Her experiences at the SPCA and with her American Pit Bull Terrier, Diamond, solidified her interest in animal behavior and shaped her career.

A veterinarian and board-certified veterinary behaviorist, Sheila graduated from the UC Davis School of Veterinary Medicine in 1996. After an internship at the Animal Medical Center of New York, for five years Sheila worked as a general practice/emergency veterinarian at animal hospitals in Northern California. In 2005, Sheila graduated from Maddie’s® Shelter Medicine Program at UC Davis. She was the first in the nation to complete a three-year, post-graduate behavior specialty training program with an emphasis on shelter animals and shelter behavior programs.

Since finishing her specialty training, Sheila has worked for the UC Davis Koret Shelter Medicine Program, the Sacramento SPCA, and started a behavior specialty practice.  Before joining Maddie’s Fund, she worked at the Animal Rescue League of Boston where she developed and oversaw enrichment and behavior modification programs for the Center for Shelter Dogs.