Maddie’s Shelter Medicine Program at the University of Florida is frequently asked, “How many cats and dogs are admitted to shelters each year and what happens to them?” To answer this question, the program periodically conducts a statewide census of animals that pass through more than 150 animal shelters across the state.

Submit 2021 Data for Your Shelter

Thank you for contributing to the Florida Shelter Animal Census. This census consists of two parts that will be used to record an accurate snapshot of shelter animal dynamics during 2021 in the state of Florida. The deadline for submitting your shelter data is February 22, 2022. Contact Keegan Spera if you missed the deadline or have data corrections to make.

What’s in the Census:

The Shelter Description and Basic Data Matrix forms may be submitted in the following ways:

A new study by the University of Florida revealed that the state’s animal shelters reached a new lifesaving record in 2020. They collectively saved nearly 9 out of every 10 animals taken in throughout the year. That’s a jump from 81% in 2019 and 54% since Maddie’s Shelter Medicine Program at the College of Veterinary Medicine first began collecting shelter data in 2013.

The Florida legislature passed a transparency statute in 2013 requiring shelters to provide data about their animal intake and outcomes upon request, and most have complied with UF’s data collection since then. A total of 154 animal shelters were known to be operating in Florida in 2020. Of these, 147 submitted data for the Florida Shelter Animal Census. This represents an estimated 95% of all shelters, 99% of all sheltered animals, and 62 of Florida’s 67 counties. Seven shelters did not submit statutorily required data, either because they did not keep records of animals cared for or because they did not respond to public records requests. 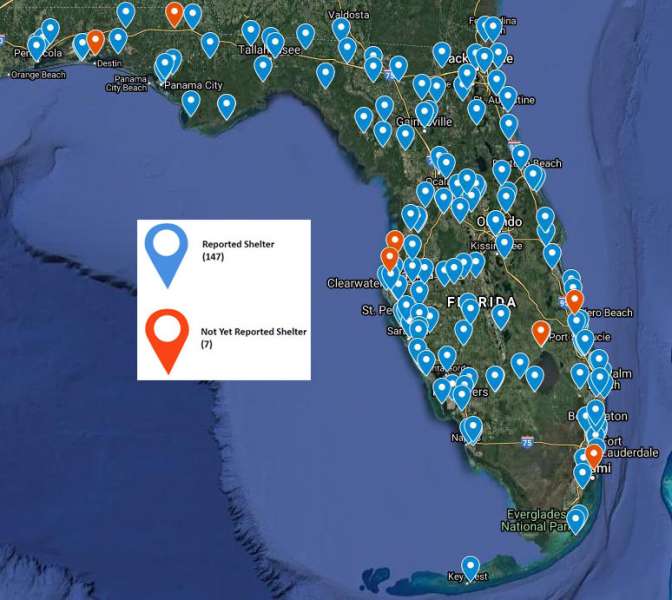 The COVID-19 pandemic had an unprecedented impact on animal shelter operations across the country. Stay-at-home orders caused shelters to focus on essential services like rescuing inured animals, investigating animal cruelty, and protecting public safety. Other traditional services such as taking in animals from the public, picking up free-roaming community cats, housing healthy animals, and operating spay/neuter clinics were deemed nonessential and put on hold. Many shelters are still operating at a lower capacity, with staffing shortages, limited visitors, and curbside services.

“A positive outcome of the pandemic shutdown was the acceleration of programs designed to help families keep their pets. Instead of making pet relinquishment the default process for struggling families, shelters are now providing interventions such as veterinary care, behavioral resources, pet food banks, and emergency boarding. This reimagination of the role of shelters in supporting their communities and Florida’s strong gains in lifesaving are advancements that we are all hoping to hang onto as the new normal.“

Many shelters held “clear the shelter” events early in the pandemic to move pets out of institutional care and into temporary foster homes or permanent adoptive homes. However, it is a commonly repeated myth that home-bound families adopted more pets during the pandemic. Animal lovers did come forward in droves to foster pets in record numbers as shelters sought to reduce their animal populations at the beginning of the pandemic, but permanent adoptions in Florida fell from 204,215 in 2019 to 172,407 in 2020.

As a state, Florida’s shelter trends have long tracked with the rest of the South, with higher animal intake per capita and higher euthanasia rates than other parts of the country. Warm climate, high poverty rates, large rural communities, and veterinary care deserts all contribute to a pet overpopulation problem that overwhelms the capacity of many shelters. However, in recent years, aggressive spay/neuter campaigns, community engagement, and state-wide collaboration among shelters and rescue groups has brought down shelter intake and euthanasia rates. In 2020, shelter animal intake was 14.5 animals per 1,000 residents in Florida, compared to 12.5 for the US as a whole. Florida shelter euthanasia was 1.9/1,000 residents, compared to 1.3 nationally.

“Despite the progress in lifesaving overall, gains were greater for dogs than for cats. Shelter intake of cats remained stubbornly high, even as intake for dogs inched down year after year. Once in the shelter, 97% of dogs were saved, compared to only 86% of cats. The most dramatic discrepancy was in the chance of a stray animal being returned to its family; 36% of dogs were returned home, but only 3% of cats were.”

There are numerous reasons why cats are at higher risk in shelters, including a low rate of identification with tags or microchips and a general overpopulation that outstrips available adoption capacity. However, a major influence is the large number of free-roaming community cats. These are neighborhood cats that are “owned by no one and by everyone.” They are fed and looked after by sympathetic residents, often at more than one home, but are also the most important source of new kittens. In response, more than half of Florida shelters have established trap-neuter-return programs to reduce the populations of free-roaming cats humanely. And faculty at UF joined those from UC Davis to launch the Million Cat Challenge, a project made possible by a grant from Maddie’s Fund to help shelters across the country save millions more shelter cats across North America.

“In addition to a mismatch between shelter resources and number of animals to care for, sparsely populated rural communities may also lack enough households to adopt the animals or low-cost spay/neuter programs to help control overpopulation in the first place.  As shelter animal lifesaving spreads across the state, a trend is developing for well-resourced urban shelters to assist struggling rural shelters by transferring their animals into areas where there is more demand for pet adoptions. Larger humane organizations are also extending their spay/neuter services into veterinary care deserts prevent the birth of more unwanted animals.”

Dr. Levy attributes many of the positive changes to the work of Maddie’s Shelter Medicine Program, which provides pro bono consultation services to Florida shelters throughout the year. Expert faculty and veterinary students visit shelters to provide a new perspective and insight on how best practices and innovative programs emerging in shelters across the country can be implemented into their current shelter operations. The shelter consultations are part of an intensive training program for veterinary students who plan to become shelter veterinarians and animal welfare leaders. The pro bono shelter consultation and shelter medicine educations programs are made possible by a programmatic grant from Maddie’s Fund.

The researchers defined a shelter as a continuously occupied “brick and mortar” physical facility that houses cats and dogs temporarily for the purposes of animal control and protection. Common examples include shelters operated by municipalities, humane societies, and SPCAs, but can also include for-profit shelters. Foster-based animal rescue organizations and sanctuaries with a permanent population are not included in the Florida Shelter Animal Census.

Disparities between cats and dogs identified in the first statewide Shelter Animal Census in 2013 persisted in 2020:

Click on the links below to review data aggregated for all reporting shelters in each county.

Would my organization be considered a shelter?

What shelter data is required for the Florida Animal Shelter Census?

Can I run a shelter software report to provide shelter data?

I already report data in Shelter Animals Count. Do I need to complete the census as well?

How do I enroll my shelter in the Shelter Animals Count Florida Shelter Data Coalition?

What if I don’t have data, or what if it is incomplete?

Is there a deadline for submitting shelter data?