Researchers with Maddie’s® Shelter Medicine Program and the University of Florida have discovered an alternative to a widely accepted vaccination protocol in cats that could literally move the needle for feline cancer treatment.

When administering vaccinations, veterinarians typically follow the current recommendations of the American Association of Feline Practitioners, giving the injections below the elbow or the knee joint in the leg. That protocol is based on the understanding that the most effective treatment for cancer that occurs near vaccine injection sites is radical surgery – amputation of a limb.

New findings published in the Journal of Feline Medicine and Surgery by Julie Levy, D.V.M., Ph.D., the Maddie’s Professor of Shelter Medicine at the University of Florida College of Veterinary Medicine, and a team of experts show that administering vaccinations in the tip of the cat’s tail appears to be as effective as vaccines at traditional sites. The researchers say tail vaccination would make surgical treatment of any cancer occurring near the site much easier, less invasive and less disfiguring for the animal, which could encourage more owners to treat the disease in their pet when it occurs.

How to Give a Tail Vaccine [Video]

Watch the video below to see a demonstration of how to perform a tail vaccination for cats. 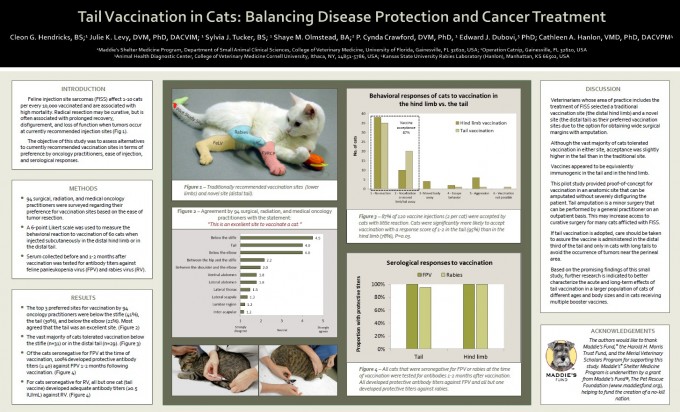 The study was supported by grants from Maddie’s Fund, the Merial Veterinary Scholars Program and the Harold H. Morris Trust Fund for Research in Diseases of Small Animals.

Read more about this study in the complete press release.