Treating the protozoan disease caused by giardia infection is a nightmare for shelters. Treatment continues for several days, and is very difficult for staff to administer. The drugs are foul-tasting, and one of them, metronidazole, has numerous side effects and a narrow margin of safety.

So, asked Dr. Cynda Crawford at the 2014 Maddie’s Shelter Medicine Conference at the University of Florida, “Is there not some other treatment regimen we can discover that is more successful, not only in curing the infection, but from a staff and animal welfare perspective as well?”

There may be. A Brazilian study published in 2011 took a look at the drug seconidazole, used to treat human cases of giardiasis, as a potential treatment for naturally-infected cats. Seconidazole is as effective as a full course of metronidazole — 95-100 percent — but only has to be given one time.

Results of Giardia Pilot Study for Use of Seconidazole

It was a small study — really, Dr. Crawford said, a pilot — but its results were encouraging. After a single dose of seconidazole, all the symptomatic cats’ diarrhea had resolved, and the side effects were minor.

“We can conclude that a single dose of seconidazole may be very effective and safe in eliminating clinical disease and shedding in giardia-infected cats,” she concluded, cautioning, “We need a lot more studies…. We need those clinical and field trials in the shelter environment… to determine the safety and efficacy of this drug.”

She pointed out the potential advantages for shelters:

It would also facilitate treatment of cats seized from large-scale hoarding cases, around half of whom will probably be infected. Shelters could simply administer one dose  to all cats at intake.

Cost Comparison of Giardia Treatment for Shelter Dogs and Cats

As for cost to shelters, she compared the cost of treatment with metronidazole vs seconidazole in the chart below: 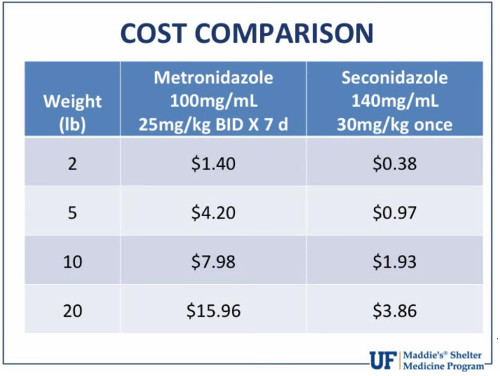 For more information, view Dr. Crawford’s entire presentation in the video below: