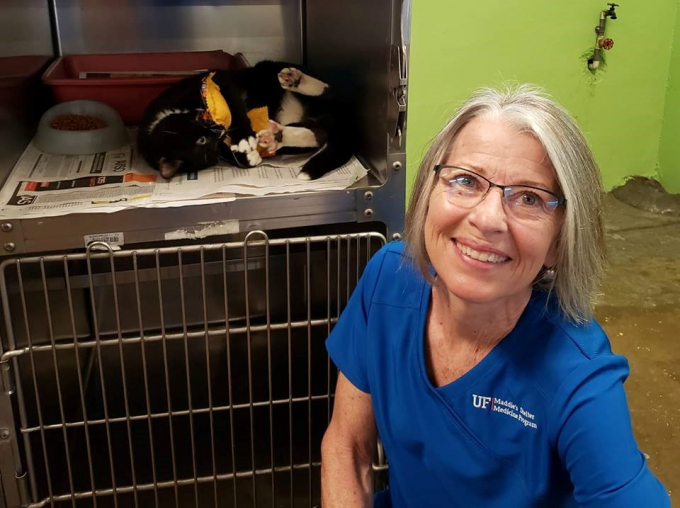 It makes sense to most people that shelter medicine will improve animal health and welfare. But it also drives adoptions, improves relationships with local veterinarians, and boosts the image of the shelter with potential adopters, volunteers, and donors in the community. That’s the next chapter in the story of Villa Michelle Albergue Animales in Mayagúez, Puerto Rico.

Villa Michelle is a private shelter that holds 11 municipal contracts. It takes in around 8,500 animals annually, one of the highest intakes on the island. Even before the destruction of Hurricanes Irma and Maria, Villa Michelle faced challenges of high intake, limited resources, and widespread disease outbreaks. Their live release rate was only around 7 percent.

The UF Maddie’s Shelter Medicine Program Puerto Rico team, led by Dr. Sarah Kirk, has made four visits to Villa Michelle, and will be returning next month. “Our involvement began in 2017 at Animal Care Expo,” said Dr. Kirk. “The Humane Society of the United States had already been working with shelters in Puerto Rico, and asked if our program would be willing to provide uniform best practices for those shelters.” Of course the program said yes, only to find their planned visits disrupted by two hurricanes that caused massive destruction on the island.

In January of 2018, four months behind schedule, Dr. Kirk, program director Dr. Cynda Crawford, Dr. Julie Levy, and Cameron Moore arrived at Villa Michelle to do an assessment. “We saw a lot of hurricane-related damage, and there was a lot of rebuilding going on,” said Dr. Kirk. “But we also saw that this was a very over-crowded shelter with a very small staff and almost no record-keeping. Although some of the animals were wearing ID bands, most were not; the dogs were group-housed and the ID bands likely fell off during play. Because the staff wrote information such as vaccination and sterilization dates on the ID bands, rather than on kennel cards, a lost neck band resulted in a significant loss of information. Without proper identification and recordkeeping, it was difficult to know who was who and what preventive care they had received. 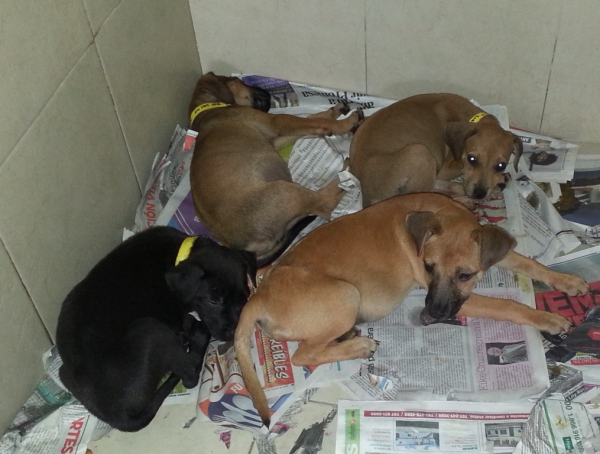 When they returned to Villa Michelle in March 2018 with the addition of Dr. Jill Kirk and veterinary students Lindsey Hidenrite and Amy Smith, one of the first things the UF team did wasn’t to treat the pets medically. It was to put identification collars on every animal in the shelter and to show the staff how to create and use kennels cards. The collars had a number that corresponded to a kennel card where information about the pet could be recorded. “That was really quite an undertaking, because they were so overcrowded and short staffed,” Dr. Kirk said. “They were operating the way they had always operated. We had to explain to them how helpful it would be to have each animal properly identified and with corresponding records so that appropriate plans could be made for each animal.” 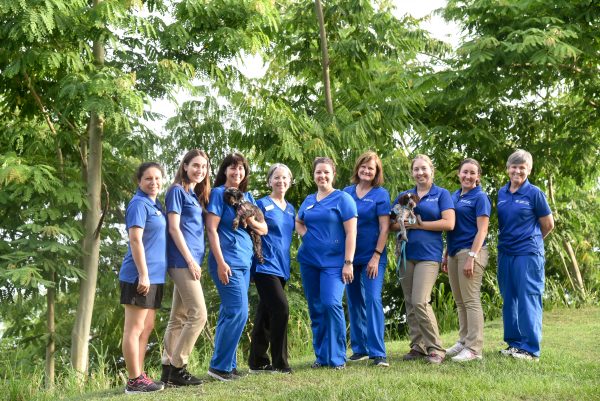 If it seems that’s an odd first move for a shelter medicine team, consider how impossible it is to provide care for animals when you can’t even tell what animal you’re looking at. Who was already sterilized? Who had been dewormed or vaccinated, and when? How long had an animal been in the shelter? Where had they come from? What was the plan to get them adopted? Identifying each animal and being able to track their medical and behavioral care is critical to the effective operation of an animal shelter.

None of which is to suggest that medicine wasn’t on the minds of the team. Given the shelter’s high intake, over-crowding, and ongoing struggles with disease outbreaks, the next thing implemented was vaccination against common diseases upon entry to the shelter, with a follow-up vaccine administered two weeks later and, in the case of puppies and kittens, continuing every two weeks until they were 5-6 months of age.

“They had self-imposed barriers to finding homes for their pets by saying each puppy or kitten had to have three vaccines before they could be spayed or neutered,” Dr. Kirk said. “That meant puppies and kittens were growing up in this over-crowded shelter. Even the best-run shelter is not a good place for puppies and kittens. As we know, the longer an animal is in a shelter, the greater is their risk of exposure to infectious disease.

Why weren’t these basic procedures already in place? “That circles back to the importance of shelter medicine education,” Dr. Kirk pointed out. “I’m not aware of any veterinarian on the island who has had shelter medicine training, either as a veterinary student or through an online program such as the one offered by UF.” 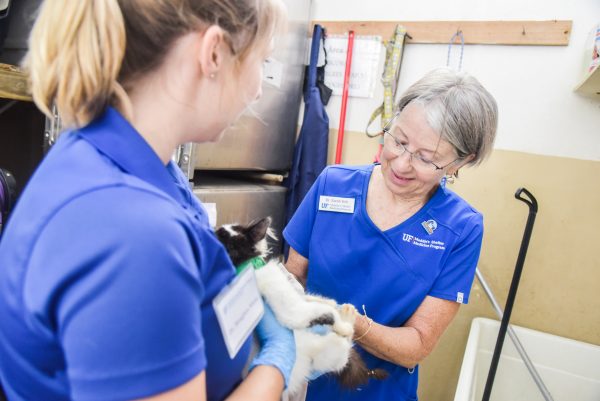 Dr. Kirk said the norm in Puerto Rican shelters was to have private practice veterinarians come in to do spay/neuter surgery, but not have any involvement with preventive care for the shelter population. “Private practitioners provide wonderful resources for all shelters, whether it’s stateside or in Puerto Rico,” said Dr. Kirk. “But if they haven’t had shelter medicine education, their preventive care protocols will be very different. They’re used to dealing with an individual animal or a couple of animals in a private home. They’re not dealing with hundreds of animals in an overcrowded shelter who are potentially exposed to far more infectious disease than the privately owned pet.”

After working with the UF shelter assessment team, things have changed dramatically at Villa Michelle. “It’s a wonderful story of working together and a lot of hard work on the part of the shelter staff,” said Dr. Kirk. “They’ve hired a veterinarian to do the medical and preventive care for the animals, and he’s done an amazing job. They keep records now, vaccines are given as scheduled, de-worming and flea/tick preventives are being administered. He’s doing daily rounds and making sure that health concerns are caught early and addressed.” 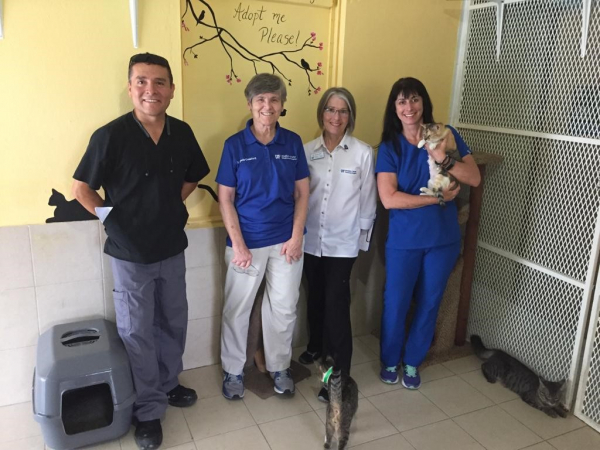 Of course, the goal of all this change isn’t just to make the animals healthier in the shelter and stop there. It’s to get them out of the shelter and into homes. That’s why the team’s next visit in July 2018 was designed to help Villa Michelle upgrade its adoption operations, starting with a two-day, reduced-fee adopthaton, the first in the shelter’s history. Dr. Kirk, Dr. Crawford, Moore, MSMP intern Dr. Meaghan Mielo, and veterinary students Laura Espinola, Jenny Moreira, and Victoria Cicchirillo helped Villa Michelle prepare for and carry out the event. In those two days, they found homes for 206 animals — a staggering achievement considering that they’d only adopted out 594 animals in the entire previous year. 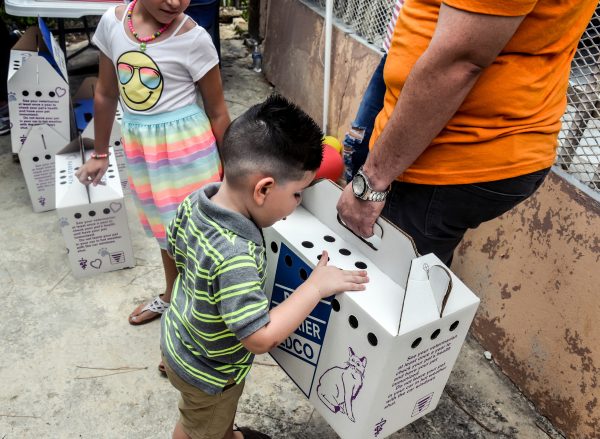 “In 2018, they basically doubled their live release rate and adopted out 1,121 pets,” said Dr. Kirk. “Their goal is to double the number of adoptions again this year. And they can clearly see there’s a direct correlation between improved medical care and increased adoptions. If we can provide the adopter with a healthy pet and can provide records of everything that’s been done, then when that animal goes to a private practitioner, they can see the shelter is providing proper preventive care, as well as sterilization. They can see the animal looks healthy. Now the local veterinarians start to have a more positive view of the shelter, and so do the adopters.

“That means adopters are more likely to come back to the shelter for another pet. Their friends and family members will see what a cute dog or beautiful cat came from the shelter. They see that the pet is healthy. Shelter medicine education and good medical practices have a ripple effect on adoptions, and also encourage volunteerism, donations, and better image for the shelter in the entire community. They drive lifesaving in every possible way.”