The publication is a collaborative effort of experts in wildlife conservation and cat protection. The working group was convened by the Alliance for Contraception in Cats & Dogs (ACC&D). According to Dr. John Boone, wildlife biologist and ACC&D Board Vice Chair, “The effectiveness of trap-neuter-return (TNR) programs often is debated, but less commonly is defined well. TNR groups most often track numbers of sterilizations performed and cats entering or euthanized in shelters as measures of effectiveness. These metrics are important, but they do not measure reduction in numbers of outdoor cats or illustrate how management translates into ‘lives saved’ in an outdoor cat population.”

In addition to population end points, the model estimated preventable deaths (cats killed by lethal management plus kittens dying before adulthood) occurring over a 10-year period, a metric that has not been evaluated thoroughly to date. Diverse management scenarios that were evaluated included TNR, removal and euthanasia, episodic culling, and taking no action. All active management scenarios were tested at both high- and low-intensity, using a published simulation model of FRC population dynamics (Miller et al., 2014) developed from empirical data. 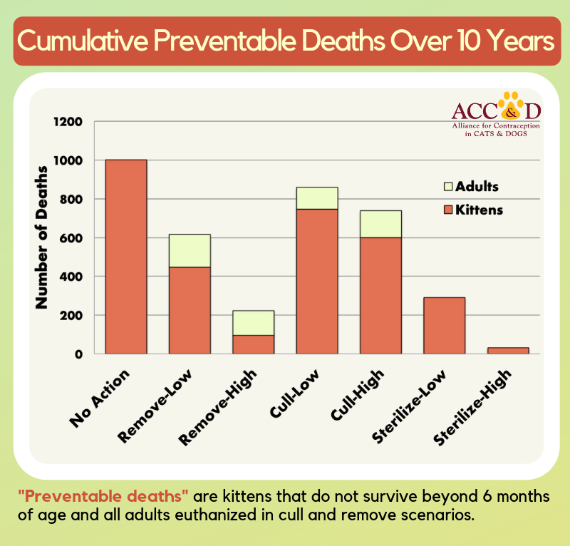 The results may change the way we think about TNR efforts and cat welfare. The study’s main findings include:

Study co-author and veterinary epidemiologist Margaret Slater of the ASPCA said, “If a TNR effort is sufficiently intensive to quickly suppress most reproduction, benefits compound into far fewer kitten deaths over time, along with gradual population size reduction. A lower-intensity effort – while helping individual cats – does not reach the thresholds necessary to achieve these greater benefits. We suggest front loading TNR efforts and adopting cats where possible to save lives while also reducing the number of outdoor cats.”