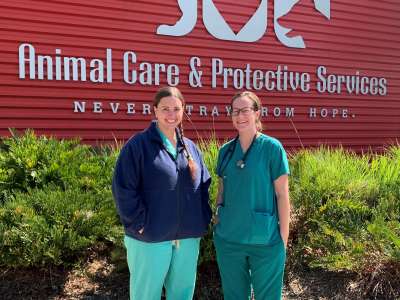 While COVID spread across the country, another disease was spreading inside Jacksonville Animal Care and Protective Services: Canine pneumovirus.

First isolated in 2010, canine pneumovirus is one of the organisms contributing to canine infectious respiratory disease complex (CIRD) – often called “kennel cough.” Most dogs are susceptible to pneumovirus, which therefore can spread like wildfire through a shelter. Infected dogs can become very ill and require advanced care in a hospital setting, which can be tremendously difficult for municipal shelters.

That was the challenge faced by UF Maddie’s Shelter Medicine Certificate Course grads Dr. Jaime Willson and Dr. Lindsey Hidenrite of Jacksonville Animal Care and Protective Services in Jacksonville, Florida. The problem was compounded by the unprecedented restrictions caused by the COVID pandemic.

“That winter we were seeing a much higher incidence of Canine Infectious Respiratory Disease Complex (CIRDC), and more than usual progressing to what we call complicated CIRDC,” said shelter veterinarian Dr. Jaime Willson.

In addition to more severe disease, Dr. Willson and her veterinary team saw other deviations from the shelter’s usual pattern. “When we notice spikes in CIRDC, they usually coincide with spikes in our population density and we attribute it to more crowding, more stress,” she said. “But we weren’t seeing that exact correlation. We were seeing more complicated CIRDC without the spike in population.”

Things came to a head in late winter when Dr. Willson was in Puerto Rico participating in a spay/neuter event. Dr. Hidenrite contacted her about the still-increasing incidence of pneumonia in the shelter’s canine population.

With the perspective she gained from being out of the shelter for two weeks, Dr. Willson realized it was time to reach out for help. She and Dr. Hidenrite had both studied under Dr. Cynda Crawford in the UF Shelter Medicine Certificate Program. Dr. Crawford is the veterinarian who initially identified canine influenza in dogs in the U.S. and is a leading expert in canine respiratory illness. She immediately arranged for symptomatic dogs to be tested for causes of respiratory disease, and the diagnosis came back: canine pneumovirus.

“When we got the diagnosis, Dr. Crawford arranged a conference call with Dr. Willson and me,” said Dr. Hidenrite. “We reviewed our dog population and she helped us decide how we needed to split up the dogs in terms of housing. She gave us an overview of the expected timeline. She continued to be a huge help with the ongoing testing and helping us choose which dogs to send samples out on every week.”

Their shelter medicine training provided a framework for the two veterinarians to activate a plan with Dr. Crawford’s support. “I specifically remember taking a class with Cynda, and her giving us lectures on specific examples of shelters with significant respiratory outbreaks and how they handled it. Of course we panicked at first, but then we realized this was exactly what we’d studied in the shelter medicine course; it wasn’t anything new for us. We knew we needed to stop exposing new dogs, to limit the number of dogs coming into the shelter, and not co-mingle dogs.”

Dr. Willson and Dr. Hidenrite weren’t able to close to intake at first, so they created separate kennel runs for symptomatic dogs, for exposed dogs, and for newly admitted healthy dogs. This separation into three groups was a big change from how intake worked prior to the outbreak. “Before this, when somebody would bring a dog into the shelter, they would just find any open run anywhere and put a dog in there,” said Dr. Willson. “We had to stop that.” New dogs went into a run by themselves, where none of the dogs had been exposed to or had symptoms of respiratory illness. They also started requiring full personal protective equipment (PPE) for each separate housing area.

They implemented a color-coding system, designating runs as red for symptomatic dogs, yellow for dogs who were exposed but not showing any symptoms, and green for dogs coming in from the community and now showing any signs of respiratory illness. They made extensive use of red, yellow, and green duct tape, including on staff members assigned to the different housing areas.

“One of the lessons we learned was that only ‘red’ staff should be working with laundry and dishes,” said Dr. Willson “We had some disease spread because at first, any level of staff member would do laundry or wash dishes. But if you think about it, they’re touching something that every single dog in this shelter has touched. Designating those jobs only for ‘red’ staffers really helped us.”

Part of the outbreak response was severely curtailing intake to the shelter, starting with pets surrendered by owners. The shelter partnered with the Jacksonville Humane Society to handle some of the dogs, but there was still some pushback from the community.

Then the city went into lockdown due to COVID.

“The local government shut down every city building to the public, and everybody who could work from home had to work from home,” said Dr Willson. “Now the shutdown wasn’t because we had a disease in the shelter, but because of COVID. That made it easier for the community to understand and accept we had to restrict our intake to emergencies only.”

The COVID shutdown created as many problems as it solved, however. Volunteers and some staff weren’t able to come in. Worse, the city stopped all adoptions, which meant even healthy dogs were stuck in the shelter. But it turned out that had a silver lining, too. With adoptions shut down, the adoption team was free to take on the task of enrichment for the dogs in the shelter, making sure they stayed happy and healthy during their long stay.

“And personally, while I don’t have any science to back it up, I really do think increased enrichment helped sick dogs recover faster. They’re getting more exercise and fresh air. They have something to stimulate their minds.”

It took a total of exactly 12 weeks to the day to clear pneumovirus from the shelter and they’ve been clear since. But along with the increased commitment to enrichment, the aftermath of the outbreak has contributed to a number of animal care improvements.

“Before this outbreak, we did not do daily rounds,” said Dr. Hidenrite. “Jaime and I are the only veterinarians for a very large shelter. But we’re still doing daily rounds every day, which is really helping us catch not just respiratory viruses but anything that is going on with an animal. And that I think is really going to help us in the future avoid another situation where we literally have an entire shelter full of dogs exposed to an illness before we catch it.”

Daily rounds are a critical practice and part of the training offered by the Maddie’s Shelter Medicine Program at UF. “Despite our time constraints, we didn’t prioritize it as we should have before,,” said Dr. Willson. “We learned a lot of lessons from this outbreak, and one of them is how important it is to do intensive daily rounds.”